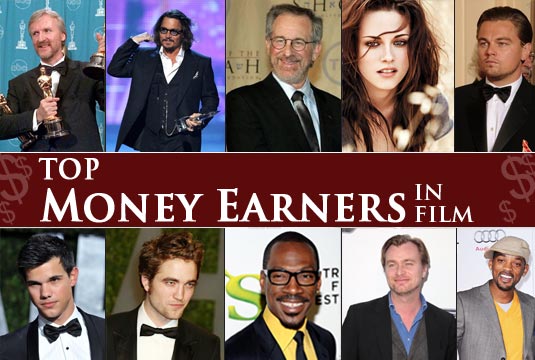 James Cameron, a Canadian film producer/director, won the No. 1 position on the film industry’s top-earners list, making him Hollywood’s richest man in 2010, according to a new list of film industry top-earners, which excludes TV and other non-film–related income. The Avatar writer, producer and director made $257 million last year, mostly from Pandora-related box office and DVD sales and associated licensing. No doubt, big-time directors are the biggest money makers. Last year Michael Bay crossed the $100 million mark. This year, by the time Avatar plays out on broadcast television, James Cameron will make close to $350 million. Johnny Depp was selected for the second place on the list of top-earning stars, directors and producers. The list estimated Depp’s pull for the year at $100 million. That broke down as $40 million for Alice in Wonderland, $35 million for Pirates of the Caribbean: On Stranger Tides and $20 million for The Tourist co-starring. On a third position is another mega director/producer, the never-ending Stiven Spielberg, of course. His estimate 2010 earnings were around $80 million of which $50 million came from Universal-theme-park royalties and consulting fees. Kristen Stewart ranked No. 13 with a $28.5 million taking, making her the top-earning woman of the six who obtained a spot on this year’s list. Stewart’s Twilight costars Taylor Lautner (No. 9; $33.5 million) and Robert Pattinson (No. 15; $27.5 million) also scored major real estate on the list. Speaking of how did Taylor Lautner find his way in Hollywood’s top 10 earners, editor Peter Newcomb said:

He’s perhaps the highest-paid teenage star right now. When they first negotiated their contracts, they were getting paid a lot less. Then, with the immense success of the film, the agents went back and renegotiated the deal.

Eddie Murphy seated the bottom No. 40 with estimated earnings of $13 million, including a bonus for Shrek Forever. Other remarkable filmmakers and actors of Vanity Fair’s “Top 40” for the Jan. 2010 to Jan. 2011 period: Inception writer/director/producer Christopher Nolan (No. 4; $71.5 million) and star Leonardo DiCaprio (No. 5; $62 million); Will Smith (No. 11; $29 million); Blind Side star Sandra Bullock (No. 22; $22 million). Taylor Lautner stated about nature of Hollywood, instead of a conclusion: