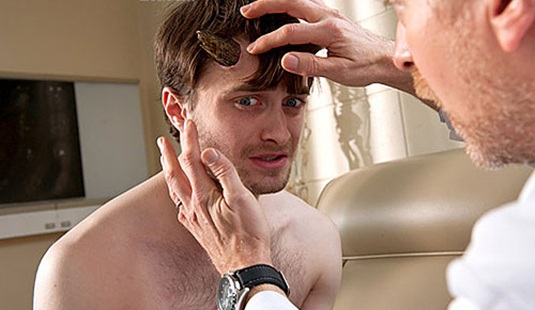 We already had a little chat about Alexandre Aja‘s dark fantasy thriller Horns, which is (unfortunately) still without an official release date. But, the good thing is that the movie will have it’s world premiere at this year’s TIFF, and that we finally have some official images to share with you. You already know what that means – time to check out Daniel Radcliffe aka Ig Perrish and his girlfriend Merrin, played by Juno Temple!

Aja directed the whole thing from a script written by Keith Bunin, but as you probably remember, the movie is based on Joe Hill‘s novel of the same name. It revolves around Radcliffe’s character, a guy named Ig Perrish who, accused of the rape and murder of his girlfriend, uses newly discovered paranormal abilities in his pursuit to uncover the real killer.

Or, if you prefer the official synopsis:

Hungover from a night of hard drinking, Ig awakens one morning to find horns starting to grow from his own head and soon realizes their power drives people to confess their sins and give in to their most selfish and unspeakable impulses – an effective tool in his quest to discover the true circumstances of his late girlfriend’s tragedy and for exacting revenge on her killer.

Beside Radcliffe and Temple, the rest of Horns cast includes Joe Anderson, Kelli Garner, Max Minghella, and James Remar. Let us know what you think about these new images (via EW) and make sure you stay tuned for more updates. We’re definitely ready for an official trailer, hope you agree?