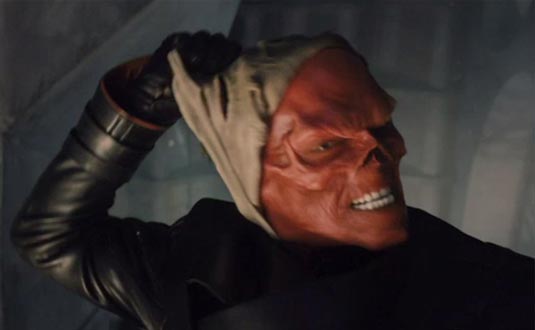 Hugo Weaving has ruled out the possibility of reappearing as Red Skull, in Captain America: The Winter Soldier in Marvel’s Phase Two. Mr. Hugo Weaving has previously starred in the big name franchises as The Matrix, Transformers and Lord Of The Rings trilogies, and he’ll be reprising his role as Elrond in all three The Hobbit films, but, it seems like his blockbuster days might be behind him. As the actor himself revealed, he was not eager to return to Marvel’s cinematic universe for playing the Captain America’s bad guy. When Collider asked him about a deal with the comics giant, he explained: “I did that (a multi-picture deal) for Captain America. I think the tendency, with those films, would be to probably not bring a villain back. They might for The Avengers, but I didn’t think I’d be in Captain America 2 or 3. I don’t think Red Skull will be there. And it’s not something I would want to do again. I’m glad I did it, though. I did sign up for a number of pictures and I suppose, contractually, I would be obliged to, if they forced me to, but they wouldn’t want to force someone to do it, if they didn’t want to. I think I’ve done my dash with that sort of film. It was good to do it and try it out, but to be honest, it’s not the sort of film I seek out and really am excited by. As an actor, to do all sorts of different films is great. It stretches you in different ways. But, I increasingly like to go back to what I used to always do, which is to get involved with projects that I really have a personal affiliation with.” You might say that we’re reading between the lines, but he does give the impression that he’s not the biggest fan of Captain America, which is a bit of a disappointment considering he did his own villain role so well. Also, such a shame to think that Weaving’s red-hot-fry-faced baddie probably won’t join forces with Thanos, Loki or Malekith to go head-on with Team Avengers. Captain America: The Winter Soldier opens on April 4th, 2014, with The Avengers 2 following on May 1st, 2015.
Continue Reading
Advertisement
You may also like...
Related Topics:Captain America, Captain America: The Winter Soldier, Hugo Weaving, Lord of the Rings, Marvel, The Avengers, The Avengers 2, The Hobbit, The Matrix, Transformers