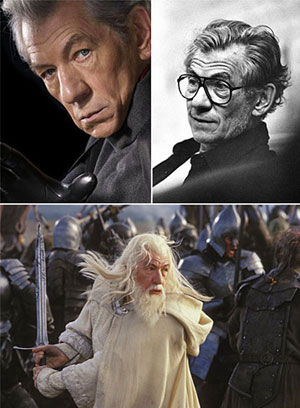 Sir Ian McKellen remarked to the media last year that he would happily do a series of Lord of the Rings prequels provided that Peter Jackson returned to helm them. With Jackson now back as executive producer, McKellan has announced on his official website his intentions about returning as the wizard Gandalf, and had the following to say: Q: So has it come to pass, good Sir McKellen? Shall the dreaming masses with their musty books and their blackened pipes at long last hear those immortal words issue from under that famous nose? “Yes, yes, my dear sir-and I know your name, Mr. Bilbo Baggins. And you do know my name, though you don’t remember that I belong to it. I am Gandalf, and Gandalf means me! To think I should have lived to be good-morninged by Belladonna Took’s son, as if I was selling buttons at the door!” Looking about, I find I share the same hopes as millions of others, so I ask, a single query in a chorus… Will you again be our Gandalf in “The Hobbit” now that the deal is settled? McKellen: Yes I will, if Peter Jackson and I have anything to do with it, he being the producer and me being, on the whole, a very lucky actor. I’ve just read your quote out loud – fabulous speech. Q: Have you been approached yet by Peter Jackson or anyone else about reprising your wonderful role as Gandalf for the two upcoming “Hobbit” movies. I read that principal photography begins in 2009, and I can’t imagine those movies without you! McKellen: Encouragingly, Peter and Fran Walsh have told me they couldn’t imagine The Hobbit without their original Gandalf. Their confidence hasn’t yet been confirmed by the director Guillermo del Toro but I am keeping my diary free for 2009! The Hobbit: Parts 1 and II are tentatively set for release in theaters in 2010 and 2011.
Continue Reading
Advertisement
You may also like...
Related Topics:Hobbit, Lord of the Rings