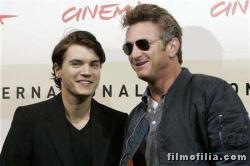 Sean Penn’s adventure tale “Into the Wild” garnered the most Critics’ Choice award nominations on Tuesday, including best picture, best actor for Emile Hirsch and best director for Penn. With seven nominations, “Into the Wild,” directed by Penn, edged out “Juno,” the offbeat comedy about a pregnant teenager played by Ellen Page that received six nods, including best picture and best actress for Page. Five films snagged five nominations apiece: “Atonement,” “Michael Clayton,” “No Country for Old Men,” “Sweeney Todd” and “Hairspray.” Joining “Into the Wild” and “Juno” with best picture nods were: “American Gangster,” “Atonement,” “The Diving Bell and the Butterfly,” “The Kite Runner,” “Michael Clayton,” “No Country for Old Men,” “Sweeney Todd,” and “There Will Be Blood.” Besides Hirsch, best actor nominations went to George Clooney for “Michael Clayton,” Daniel Day-Lewis for “There Will Be Blood,” Johnny Depp for “Sweeney Todd,” Ryan Gosling for “Lars and the Real Girl,” and Viggo Mortensen for “Eastern Promises.” Along with Page, others getting best actress nods were Amy Adams for “Enchanted,” Cate Blanchett for “Elizabeth: The Golden Age,” Julie Christie for “Away From Her,” Marion Cotillard for “La Vie en Rose,” and Angelina Jolie for “A Mighty Heart.” “No Country for Old Men,” the dark crime thriller from brothers Joel and Ethan Coen, has already won top film honors from New York Film Critics Circle Awards and the National Board of Review of Motion Pictures. The Coens scored a best director nod from the Critics’ Choice awards on Tuesday. Such critical nods are helpful for the studios’ marketing campaigns as they vie for Oscar attention for their films. Next on the awards season’s agenda are the Golden Globe nominations on Thursday. The Critics’ Choice nominees were announced by the Broadcast Film Critics Association, which has more than 200 members in the United States and Canada representing television, radio and online critics. The winners will be announced on January 7. A full list of the nominations is available at http://criticschoice.vh1.com. Into the Wild trailer
Continue Reading
Advertisement
You may also like...
Related Topics:Sean Penn