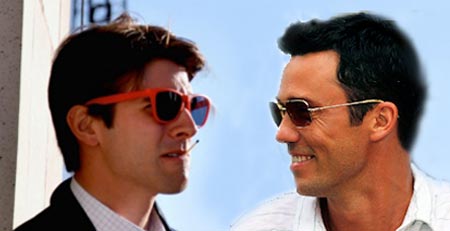 J. Edgar cast is getting bigger and bigger every day. Today we’re here to report that Jeffrey Donovan and Miles Fisher are the latest names that have signed on to star in Clint Eastwood’s Hoover biopic.

We’re sure you already know all important things about this project, but just in case you forgot something, check the rest of this report.

The story, written by Dustin Lance Black (who previously worked on Milk) will mainly follow FBI director Hoover and Toulson as young men, but several flash forwards will be scattered throughout the film that show the two as old men in their seventies.

While initially only colleagues, Hoover and Toulson will share an onscreen kiss following an altercation, which then leads to Hoover bringing Toulson in as the FBI director’s right-hand man. Brian Grazer is on board to produce.

By now you already know that Leonardo DiCaprio leads the cast as the former FBI director, with Armie Hammer as his best friend and alleged lover.

On the other hand, Naomi Watts stars as his personal secretary, Josh Lucas as famed aviator Charles Lindbergh, Damon Herriman as Lindbergh baby kidnapper Bruno Hauptmann and Ed Westwick as Agent Smith, a writer who is drafted to pen Hoover’s biography but comes a little too close to Hoover’s secrets. Legendary Judi Dench is also on board.

Now we have Miles Fisher on board to star as Agent Garrison, “an FBI man who interviews his boss, J. Edgar Hoover, at different stages in the movie.” On the other hand, TV’s Burn Notice star Jeffrey Donovan will be playing Hoover rival Robert F. Kennedy.