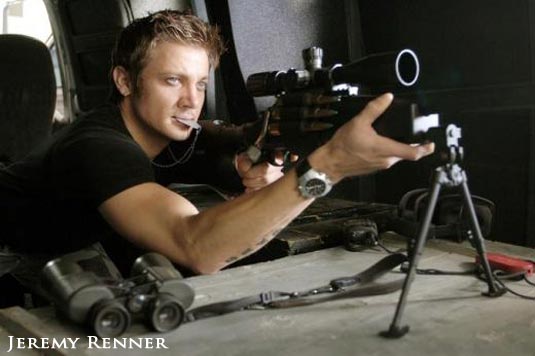 Jeremy Renner (The Hurt Locker) has hinted he may be playing the comic-book character, archer hero Clint Barton, a.k.a. Hawkeye, in Kenneth Branagh‘s “Thor”

“Hawkeye could be interesting,” Renner said. “I’d love for that to happen. It’d be fun… I’m just happy to get considered for big franchise roles like that.”

“I’m not exactly sure why he’s shutting down the idea of playing the Cap’n in favor of the much less prestigious Hawkeye, but I’m intrigued. Let’s hear more.

“If I was a betting man, I would bet that Hawkeye would probably show up in Thor, and then be in The Avengers,” he said. “But do I know for sure? I can’t say. But I’d love for that to happen. It’d be fun.”

Clint Barton, Hawkeye info: While Hawkeye has no superhuman powers, he is a trained athlete and tactician, being at the very peak of human conditioning. The character is a grandmaster marksman, having been trained by the criminal archer Trick Shot, and has been a highly trained acrobat and aerialist since his days in the circus. Hawkeye has been thoroughly trained by Captain America in tactics, martial arts, and hand-to-hand combat. Hawkeye excels in the use of weapons, especially the bow and arrow, and carries a quiver containing a number of customized “trick-arrows” that use sonics, gas, explosives, and flares, among others.

“Thor” script was written by Mark Protosevich and Zack Stentz & Ashley Miller.This epic adventure spans the Marvel Universe; from present day Earth to the realm of Asgard. At the center of the story is The Mighty Thor, a powerful but arrogant warrior whose reckless actions reignite an ancient war. Thor is cast down to Earth and forced to live among humans as punishment. Once here, Thor learns what it takes to be a true hero when the most dangerous villain of his world sends the darkest forces of Asgard to invade Earth “Thor” will start production in January in Los Angeles and opens May 20th, 2011.