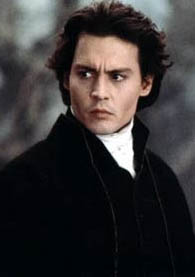 Director Terry Gilliam is determined to finish shooting Heath Ledger’s last film ‘The Imaginarium of Doctor Parnassus’ with Johnny Depp in his place. Filming on the set of the fantasy movie was allegedly abandoned following the death of the actor, who was found dead in his New York apartment on Tuesday afternoon (22Jan08). But reports now claim Gilliam is keen to have the Pirates of the Caribbean star stand in for the tragic Ledger to complete the remaining scenes. A studio source tells The Sun:‘There is a point in the film when Heath falls through a magic mirror. He could change into another character after that and that is where Johnny would come in. It’s a weird, fantasy, time-travel movie so Heath’s character could easily change appearance. It would be a poignant moment.’ ‘Johnny’s not working at the moment so everyone is praying he will do it.’
Continue Reading
Advertisement
You may also like...
Related Topics:Heath Ledger, Johnny Depp