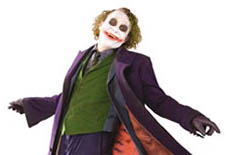 For all Bat-fans: Don’t worry, cause Warner Brothers are not insisting that Christopher Nolan recut his film, The Dark Knight. According to a source close to Movie Hole: “I know for a fact that that scene is in the film. I also know that Warner Brothers has made no such mandate and that Chris [Nolan] is honest when saying that he will not change what was intended with The Joker.” The reason the rumor started was because reports were that test audiences thought it was distasteful to show Heath Ledger’s character in that situation. I guess they must have thought it was “too soon” for that to be shown to people.
Continue Reading
Advertisement
You may also like...
Related Topics:Christopher Nolan, Dark Knight