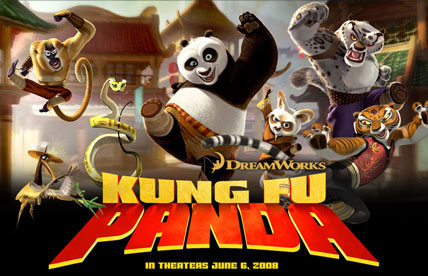 The feature trailer of “Kung Fu Panda” has been released online by DreamWorks Animation. Featuring the voices of Jack Black, Angelina Jolie, Jackie Chan and Dustin Hoffman, the trailer that runs over two minutes showcases the comic act of the leading character, Po, as he tried his best to be one of the Kung Fu masters. The animated video footage begins as the narrator speaks about the background of the Kung Fu master stating that despite successfully trained five legendary warriors, the master hasn’t met his biggest challenge yet. As he says that, Po, the Kung Fu master-wanna-be came into the screen apparently exhausted after climbing the steep wall leading to the master’s palace. The trailer shows Po’s clumsiness but also his enthusiasm on joining the world of Kung Fu. As it is ended with a scene of Po and his master fight over a dumpling with “Kill Bill” score at the background, it promises cute comedy of the movie. Before “Panda” hits theaters on June 6, the trailer of “Kung Fu Panda” could be watched on its trailer page at AceShowbiz or seen below.
Continue Reading
Advertisement
You may also like...
Related Topics: