“Leap Year” tells the story of a successful working woman played by Amy Adams. Her job is to take upper class apartments and furnish them before the realtor starts shopping them. She is very good at her job and once the apartment is sold, she returns and removes all the furnishings. Her opinion is she is selling people a dream. She is also a dominating woman who believes that her strong will is enough to get her anything she wants. When her boyfriend fails to propose to her on the night she believes it is coming, she becomes depressed. Her absentee father (John Lithgow) pops back into her life after a lengthy absence and recounts how her grandmother proposed to her grandfather on Feb. 29 in a Leap Year, an old Irish tradition. She sets off to Dublin, where her boyfriend is on a business trip, with the intentions of proposing to him on Leap Year. Anna (Adams) is a stereotypically overly organized woman, the type who wipes down the edge of the counter when sipping wine at a bar. Her boyfriend, Jeremy (Adam Scott), is an overworked cardiologist. They live by BlackBerry scheduling. When Jeremy travels to Dublin, Ireland, for a convention, Anna decides to tag along later and, in an Irish tradition, surprise him by proposing marriage on Feb. 29 – Leap Day. Which might have been a better title, who knows…read more [AZ Central]

Amy Adams as Anna and Adam Scott as Jeremy in Leap Year While watching Leap Year, I swear I could hear the Irish countryside quietly weeping as it witnessed Goode and Adams slog through the film’s succession of trite misadventures, the talented actors straining in vain to manufacture some semblance of romantic chemistry as an assortment of jolly Waking Ned Devine types futilely spurred them on. Oh, if only Greenpeace could have intervened and put a halt to such wanton environmental desecration. It’s the worst thing to come out of Ireland since The Cranberries…read more [Yahoo Movies]

Just one problem (and, of course, there wouldn’t be a movie if there weren’t a problem): Bad weather diverts her plane from Dublin to Wales, forcing her to rent a fishing boat, which drops her at a remote village on the opposite side of Ireland from Dublin. There, she and Declan O’Callahan (Matthew Goode) meet cute when she walks into his pub and hires him to drive her to Dublin. For a variety of comedically shaky premises that are not as funny as someone (director Anand Tucker? Kaplan and Elfont? A mentally challenged focus group?) seems to think, it takes them almost three squabbling days to traverse a country the size of the state of Pennsylvania. Watching this film seems to take even longer than that…read more [The Huffington Post]

Matthew Goode star as Declan in Leap Year The only reason the film sort of works is due to the chemistry between stars Amy Adams and Matthew Goode, both of whom bring a fresh, likable quality that’s often missing in these films. Judging from the talkbacks here on the site, I’m not the only JoBlo Schmoe with a crush on Amy Adams. There’s really something about her that makes anything she’s in watchable, and the Adams charm is in full effect here. As for co-star Goode, he’s had solid run of films lately, with a scene stealing turn in Woody Allen’s MATCHPOINT, and strong roles in WATCHMEN, and the recently released, A SINGLE MAN. He’s definitely a star on the rise, and he pulls off the average Joe shtick a lot better than someone like Dempsey or Gerard Butler (who REALLY needs to stick to action flicks and dramas)…read more [Joblo] It’s a romantic comedy, a genre of which I happen to big a fan of (don’t judge me) but it just didn’t move me. Written by Deborah Kaplan and Harry Elfont and directed by Anand Tucker, the plot line is incredibly simple. Anna, Miss Adams, and Jeremy (Adam Scott) have been dating for four years and are the perfect Boston couple. They are sophisticatedly dressed at all times, he is a cardiologist and she is an apartment stager, setting up spaces for real estate agents to help them move properties, and they frequent the fanciest restaurants and have fabulous friends. And they have a total of zero chemistry. They never kiss on the mouth, their hugs are stiff and awkward and they discuss their life together as a business deal rather than a relationship…read more [Blast Magazine]

Leap Year Photo – Matthew Goode stars as Declan and Amy Adams stars as Anna Even the moments where the film begins to veer into uncharted territory, where you think there might be some hope yet that it offers something, anything, in the way of freshness or innovation, the film quickly rights itself back onto its banal and true-to-the-tracks course. Sure, Anna’s boyfriend doesn’t propose to her in the opening minutes of the film, and this alone might be justification to view him as a bad guy. However, throughout much of the rest of the film, we see him as this kind and caring man, and we begin to wonder who Anna will, ultimately choose. Dub this a spoiler alert, but this idea gets scratched like an old record. When it’s all said and done, Anna clearly has no choice but to leave this jerk and run back to her adventurous Irishman. Why? Because it’s a movie, and it’s lazy…read more [We Are Movie Geeks] Oscar nominee Amy Adams once again takes on the romantic comedy genre with her latest film, Leap Year. It’s a mix of fantasy, charm, and bitter reality all rolled into one. Imagine her character Giselle from Enchanted with a more expensive wardrobe, but the same naive view on relationships. Leap Year offers the opposites attract scenario with a different location, and a few new faces. Take a look at one of the first rom-coms of 2010…read more [ScreenCrave]

Amy Adams as Anna and John Lithgow as Jack in Leap Year If predictability were Leap Year’s only sin, then it wouldn’t have been so offensively turgid. But Deborah Kaplan and Harry Elfont’s direly unfunny and almost anti-romantic screenplay doesn’t seem to miss a single trick in the screenwriter’s handbook of hand-me-down clichés. Perhaps it was written on a dare? Or maybe everyone had a few weeks off and wanted to go to Ireland? There must be a reason somewhere for this film’s existence, but it sure is not to be found on the screen…read more [FilmCritic]

Leap Year Wallpaper, Amy Adams Leap Year Sweepstakes for a chance to win a trip to Ireland! Fandango is giving away a trip for 2 to Dublin plus a $1000 Visa Cash Card. Visit the sweepstakes site and enter to win! Don’t miss the tons of other great prizes they have to offer too! 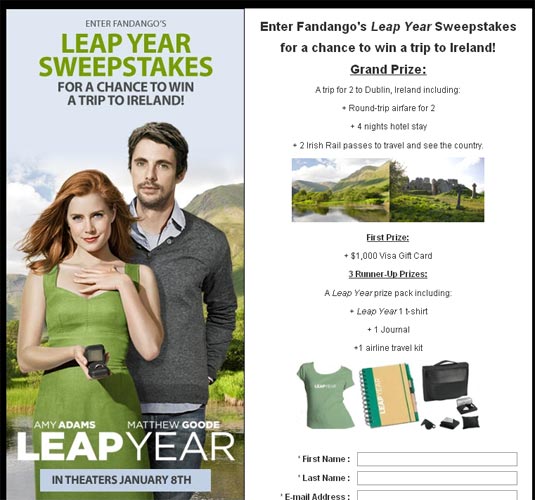