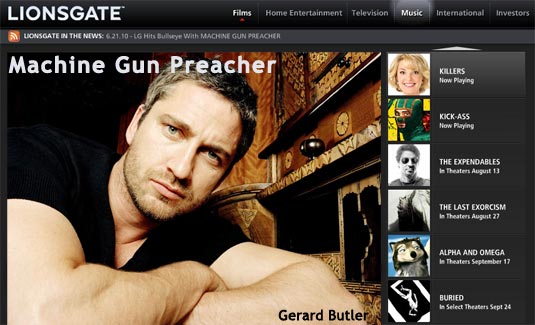 “Machine Gun Preacher combines a fascinating, action-packed story and unique characters with great talent on both sides of the camera. We’re delighted to be back in business with our friend Marc, one of the most gifted and versatile filmmakers working today. And Gerard Butler is the ideal actor to capture the strength, complexity and charisma of this film’s real-life hero, Sam Childers.”

“When I learned about Sam Childers, I thought, ‘here is a man who is making a difference, defying the odds and not just talking about what he believes but actually doing it.’ Seldom do you find a story that is gripping and relatable but is also about something bigger. Here was a movie that begged to be made. Jason Keller wrote an exceptional screenplay, and I can think of no one better able to depict this story than my dear friend, Marc Forster.”

“I am honored to play an integral part in telling the amazing story of Sam Childers. I think this is the perfect movie as a foray into the film business, as it is both commercial and topical. In today’s society, stories like his are rare and this is one that deserves to be told.”

“I am thrilled to be working again with Lionsgate. They have a keen understanding for the complexity of the material and will give our film the care and guidance it needs to expose the story to the masses.”