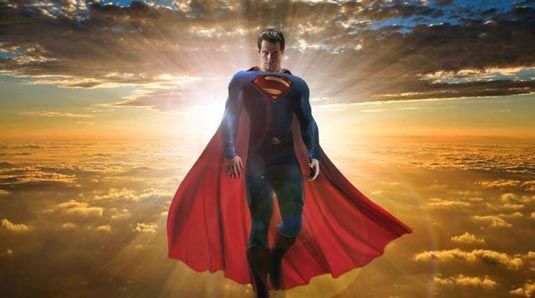 Warning: This text contains spoilers. Roaming the internet vastness as I usually do, I noticed that someone over at the SHH Boards has posted some detailed descriptions of Man Of Steel concept art that was shown at a WB Tradeshow. As you might know, the show started off with the Jor-El trailer that has been released in theaters. After that the concept art was shown that seems to confirm information that Man Of Steel will showcase a war torn Krypton. The art was drawn by James Acheson who worked on Daredevil and Sam Raimi’s Spider-Man as well as Michael Wilkinson who worked on 300 and Watchman. Check out the detailed description below, and again, WARNING! Contains spoilers. – Henry Cavill in Supes suit full body, and then a half body shot of Cavill using the monochromatic suit possibly, the uncolored suit for some early test shot. – Jor-El suit minus his armor full body, and Jor-El with his intricate Kryptonian battle suit with some rifle. – Zod with complete suit with cape and rifle, Zod with his black undersuit full body and then Zod being shackled in neck and hand, connected. – Zod’s prison structure, called Black Zone, floating, also function as a transport kind of vehicle. Guards are patrolling the rooms inside the prison. – An artwork of a specific scene showing the arrival of the Black Zone in the sky of Metropolis. – Zod’s using helmet and different armor when his first arrived on earth, possibly adjusting the air and all. – Jor-El scout ship, who floated and landed in Artic i guess, consist of Supes Kryptonian suit inside. there’s an artwork of the cockpit also. – The design of Some sort of KEY to activate the ship that were shown in Comic Con. – Two designs of bad ass rifle and handgun courtesy of Planet Krypton. – A highly rendered art of Henry as Superman. Along with this piece of info, the poster gave some details about what General Zod’s suit will look like: “From the picture that i saw, definitely dark, the same color with Faora’s which is black,” he describes. He also said that Zod’s cape is normal on Krypton but torn and ravaged on earth. He also has a helmet that he wears that the user said looks like a combination of Stormtrooper and Engineer’s helmet breathing apparatus from Prometheus. As far as Zod’s crest you can expect it to have the same outer shape as the El’s shield Jor-El’s, the inside is swirls and basically it looks like a fat C shaped but facing the other way around. Beside Zod’s suit there was a piece of concept art of the Black Zone floating over alien terrain that the user believed to be Krypton. To bring this visual to life he said that it looked like a mixture of Deathstar surface and Hades landscape of Blade Runner. Hopefully we will be getting some new visuals from the movie soon. While none of the art has been officially released, these descriptions will have to appease you, for now. Directed by Zack Snyder, Man Of Steel will be released on June 13th, 2013 and it stars Henry Cavill, Amy Adams, Russell Crowe, Michael Shannon, Kevin Costner, Diane Lane, Laurence Fishburne and others.
Continue Reading
Advertisement
You may also like...
Related Topics:Amy Adams, Diane Lane, Henry Cavill, Kevin Costner, Laurence Fishburne, Man of Steel, Michael Shannon, Sam Raimi