Connect with us
The Broadcast Film Critics Association (BFCA) announced today that renowned actor and philanthropist Matt Damon will be presented with the fourth annual Joel Siegel Award at the16th annual Critics’ Choice Movie Awards. The ceremony will air live on VH1 on Friday, January 14 at 9:00 PM ET/PT. Given annually, this special award pays homage to beloved “Good Morning America” film critic and BFCA member Joel Siegel, who lost his long struggle with cancer in June, 2007. 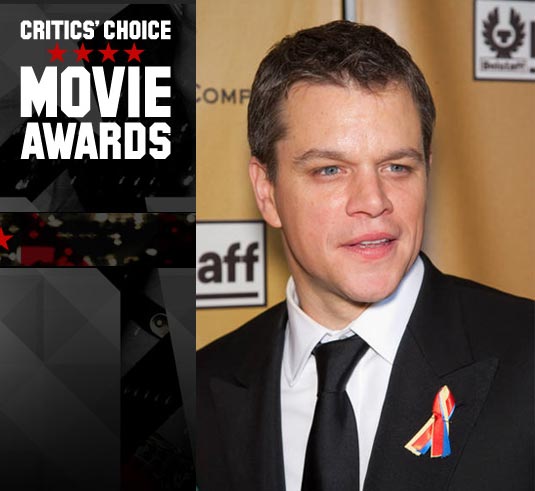 Matt Damon has long held a special place in the hearts of the BFCA membership. He won his first two Critics’ Choice Awards 13 years ago, when he burst on the screen as the star and co-writer of “Good Will Hunting.” He has gone on to receive five more nominations, including last year for his work in “Invictus.” Damon is a worldwide box office superstar, thanks to such smash hits as “Saving Private Ryan” and the “Bourne” and “Ocean’s” series. This year, he played crucial roles in two films being honored at the Critics’ Choice Movie Awards, as the Texas Ranger LaBoeuf in the Best Picture nominee “True Grit” and as the voice of the Best Documentary Feature nominee “Inside Job,” as well as starring in Clint Eastwood’s “Hereafter” and Paul Greengrass’ “Green Zone.”

“Matt personifies the values celebrated by the Joel Siegel Award,” says BFCA President Joey Berlin. “Among his many charitable endeavors, Matt’s work as co-founder of Water.org has inspired us to honor him. The profound mission of Water.org is to help bring a day when everyone on the planet can take a safe drink of water. Matt is also a founder of Not On Our Watch, which focuses global attention and resources to stop and prevent mass atrocities. He helps fight AIDS and poverty as a supporter of the ONE Campaign. He is also an ambassador for ONEXONE, a non-profit foundation committed to supporting, preserving and improving the lives of children at home in the United States and around the world, and a spokesperson for Feeding America, this country’s largest hunger-relief organization. Clearly Matt understands, as Joel did, that the true value of celebrity is as an enhanced platform to do good works for others.”

Counting down to the live premiere of the Critics’ Choice Movie Awards, VH1 and MTV will air the 16th Annual Critics’ Choice Movie Awards Red Carpet Pre-Show live on Friday, January 14 at 8:30 PM ET/PT. Covering the excitement of the celebrity arrivals on the red carpet will be co-hosts Tim Kash and La La Vazquez. The pre-show will also be available on CriticsChoice.VH1.com. The 250 members of the BFCA, the largest film critics’ organization in the United States and Canada, representing television, radio and online critics, selected nominees in each of 25 categories. The awards are bestowed annually to honor the finest in cinematic achievement. Eligible films were released in 2010. The accounting firm of Gregory A. Mogab tallied the written ballots. Historically, the Critics’ Choice Movie Awards are the most accurate predictor of the Academy Award nominations. All four major acting category winners at the Academy Awards in 2010 were first Critics’ Choice Movie Awards winners in the same categories and were present at the January 15, 2010 ceremony to graciously give their first acceptance speeches of the awards season. The BFCA also recognized “The Hurt Locker” for “Best Picture” and Kathryn Bigelow as “Best Director,” making her the first female to win the award. “The Hurt Locker” and Bigelow also went on to win the Academy Award for “Best Picture” and “Best Director” but were both overlooked at the Golden Globes. The 16th annual Critics’ Choice Movie Awards, honoring the finest in cinematic achievement among 2010 film releases, announced its nominees on Monday, December 13, 2010. Final ballots will go out to the BFCA members on January 10, 2011 with the deadline for returning final ballots happening on January 12, 2011. For a full list of this year’s nominees and information about the show visit CriticsChoice.VH1.com. The site also offers VH1.com’s Award Season Twitter Tracker where users can see the awards show buzz that’s happening on Twitter in real time and Quick Critic, an opportunity to share short film reviews for a prize that includes a trip for two to next year’s Critics’ Choice Movie Awards. Additionally, interviews with many of the acting nominees can be found on the BFCAs’ site CriticsChoice.com . The 16th annual Critics’ Choice Movie Awards is executive produced by Jesse Ignjatovic for Den of Thieves, Joey Berlin for Berlin Entertainment and Lee Rolontz for VH1.
Continue Reading
Advertisement
You may also like...
Related Topics:Matt Damon