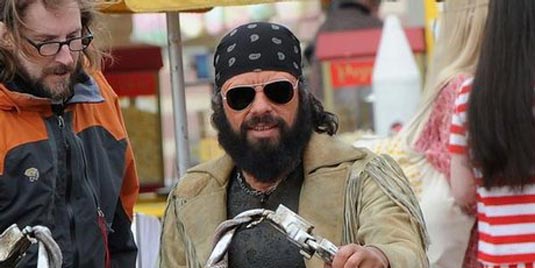 We already had a chance to see the first trailer for the upcoming Men in Black 3 which is set to open on May 25th, 2012. Today, it’s time for us to share the first look at Jemaine Clement, one of the stars in the Barry Sonnenfeld directed movie. You already know Clement is a bad guy, but how bad? Take a look! While you’re enjoying this image, I will remind you that Will Smith and Tommy Lee Jones are once again on board to play Agents J and K. J has seen some inexplicable things in his 15 years with the Men in Black, but nothing, not even aliens, perplexes him as much as his wry, reticent partner. But when K’s life and the fate of the planet are put at stake, Agent J will have to travel back in time to put things right. J discovers that there are secrets to the universe that K never told him – secrets that will reveal themselves as he teams up with the young Agent K to save his partner, the agency, and the future of humankind. The rest of the cast includes Josh Brolin, Emma Thompson, Nicole Scherzinger, Alice Eve and Michael Stuhlbarg.
Continue Reading
Advertisement
You may also like...
Related Topics:Alice Eve, Barry Sonnenfeld, Emma Thompson, Jemaine Clement, Josh Brolin, Men In Black 3, Tommy Lee Jones, Will Smith