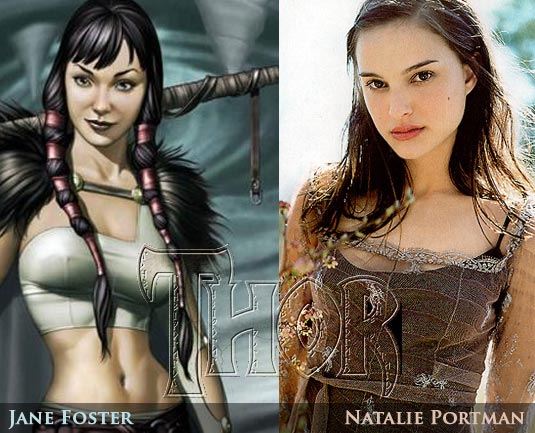 Marvel announced today that Natalie Portman has been cast to star as Jane Foster in upcoming “Thor.” Foster, a nurse, was a character from the early comic book lore, and was Thor’s first love. Portman will join Chris Hemsworth who’s playing the title role and Tom Hiddleston who is playing the villain Loki, the god of mischief. Marvel Studios expands its film universe with a new type of superhero: Thor. This epic adventure spans the Marvel Universe; from present day Earth to the realm of Asgard. At the center of the story is The Mighty Thor, a powerful but arrogant warrior whose reckless actions reignite an ancient war. Thor is cast down to Earth and forced to live among humans as punishment. Once here, Thor learns what it takes to be a true hero when the most dangerous villain of his world sends the darkest forces of Asgard to invade Earth. Kenneth Branagh (Sleuth, Hamlet, Frankenstein) is directing the movie from a screenplay by Ashley Miller (Agent Cody Banks), Mark Protosevich (I Am Legend, The Cell) and Zack Stentz (Terminator: The Sarah Connor Chronicles). “Thor” is scheduled to begin filming in early 2010 for a May 20, 2011 release. Portman will next be seen starring in Jim Sheridan’s “Brothers” opposite Jake Gyllenhaal and Tobey Maguire.
Continue Reading
Advertisement
You may also like...
Related Topics:Chris Hemsworth, Kenneth Branagh, Marvel, Natalie Portman, Tom Hiddleston