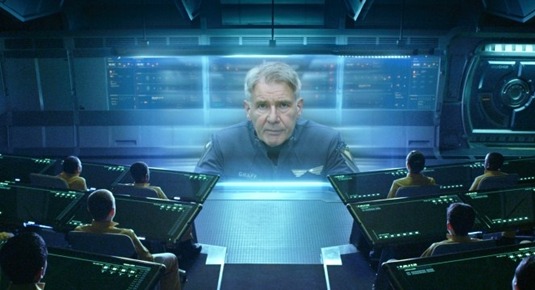 Five brand new pics with an unusually gifted kid and Colonel Hyrum Graff – that’s exactly what we have for you today. Ender’s Game is set to hit theaters this November, we already shared the final trailer and poster for the whole thing, and now – time to take another look at Asa Butterfield and Harrison Ford. Head inside to check them out…

As you already know, director Gavin Hood stands behind this epic adventure which is based on the best-selling novel of the same name written by Orson Scott Card, and follows an unusually gifted child is sent to an advanced military school in space to prepare for a future invasion.

The movie has an awesome cast on board, which, beside Butterfield who stars as Ender and Ford as Colonel Graff, also includes Ben Kingsley as Mazer Rackham, Abigail Breslin as Valentine Wiggin, Hailee Steinfeld as Petra Arkanian and Viola Davis as Major Anderson.

In case you forgot the official synopsis:

Ender Wiggin is a shy but strategically brilliant boy recruited to join the elite. Arriving at Battle School, Ender quickly and easily masters increasingly difficult challenges and simulations, distinguishing himself and winning respect amongst his peers. Ender is soon ordained by Graff as the military’s next great hope, resulting in his promotion to Command School. Once there, he’s trained by Mazer Rackham himself to lead his fellow soldiers into an epic battle that will determine the future of Earth and save the human race.