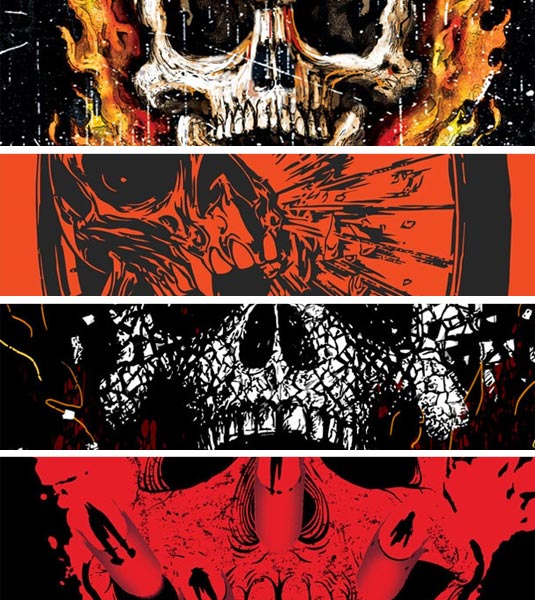 Man, I really hope you like skulls because we have four new Ghost Rider: Spirit of Vengeance skulls just for you! It’s teaser art actually, but everything is better than that photoshop poster which just reminds us all that we’re dealing with some serious 3D rider in here.

Not much of a story. We have Nicolas Cage as Johnny Blaze, aka Ghost Rider, hiding out in remote Eastern Europe and struggling to repress his curse. Blaze is recruited by a sect to take on the devil, played by Ciaran Hinds, who wants to take over his mortal son’s body on the kid’s birthday. I definitely hope this sequel will be better than the first movie. After all some serious cast is involved. Beside Cage and Hinds movie also stars Idris Elba, Christopher Lambert, Johnny Whitworth, and Violante Placido. And as for these great unofficial screaming skulls (the black one is my favourite) – judge for yourselves. I think it’s pretty cool, and directors Mark Neveldine and Brian Taylor should be proud ’cause we have with some seriously good art here. Ghost Rider: Spirit of Vengeance is set to hit 3D and 2D theaters on February 17th, 2012.