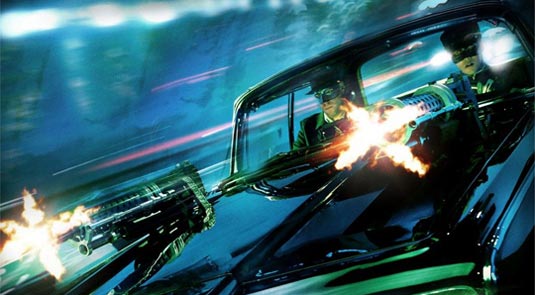 Below we have the second poster  for the upcoming The Green Hornet film, starring Seth Rogen, Cameron Diaz, Jay Chou, and Christoph Waltz. Synopsis: When co-founder of a San Francisco newspaper The Daily Sentinel, John Paul, is shot in his home, Frank Scanlon, district attorney, considers John’s position as a crime and politics reporter and rules out robbery as a motive. Britt Reid, publisher for the Sentinel, promises his father, Dan, who’d co-founded The Sentinel with John, that he won’t rest until he finds out who did this. At the paper, John’s former position as executive TV producer is taken over by Rex, a shameless opportunist, who exhibits not one trace of remorse for the company’s recent loss. In fact, the first meeting he holds in his new office is with a goon named Tommy, who inquires about what Rex plans to do with his newfound corporate capital. When Rex suggests that he’s thinking of bowing out with his cut after an illicit job they’ve just completed, Tommy won’t allow it and tells Rex that the crew needs something of him–the ability to communicate anywhere, in real-time, without being detected via discreet usage of his TV station for two weeks–if anyone can manipulate info, it’s newsmen, he says. With the right people in key positions within The Sentinel, he concludes, anything is possible. He promptly gives Rex a short list of people to fire. In the forensics lab, a print is lifted from inside John’s condo–its match is Mr. Yao Xchan, a known Chinese national drug smuggler with gang connections, most recently known for his attempt to smuggle over a quarter ton of dope into San Francisco via commercial shipping. Frank calls Britt with his address, and Britt and Kato promptly change outfits–Kato, into hat and mask, with gloved hands, and Britt into a green suit, clad as the Green Hornet. They both hop in his car, the Black Beauty, type in the address, key in commands, and send a metallic black bee that rises from a small door on the car’s hood to fly off under their control and give them closer views of their destination. After it locates Xchan, they break into his apartment and Hornet questions him about his whereabouts during the shooting three days ago, but he doesn’t answer–he finally admits that he had pulled the trigger himself. He’d been paid by someone, but just before his eyes glaze over and he passes out, all he can utter of the name is, “Choo… choo…” The film is directed by Michel Gondry (The Science of Sleep, Be Kind Rewind). The screenplay is by Seth Rogen & Evan Goldberg, based upon “The Green Hornet” radio series created by George W. Trendle. The Green Hornet will be released in IMAX 3D, simultaneously with the 2D and 3D release of the movie on January 14th 2011. In case you haven’t already watched it, check out The Green Hornet trailer.