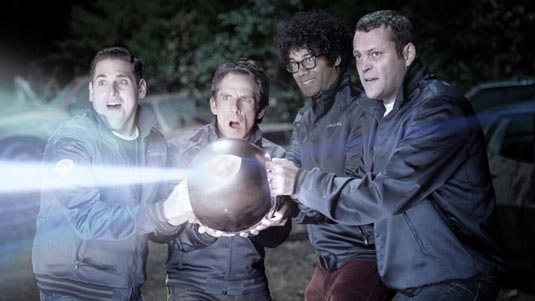 If I remember well, we wrote earlier about its unfortunate timing regarding its subject, so we thought that the Fox forgot about this one and its promotion since it had a really bland poster, but it seems that things are finally starting to heat up. Twentieth Century Fox has released a described-as-funny new international trailer for The Watch, but if I’m going to judge a film by its trailer, then I’m in for an hour and a half of not-so-funny movie. I mean, there was a few jokes that I smiled at, but that’s it. And it doesn’t help that one of the actors is at the same time one of the two I can’t stand to see in the movies (Jonah Hill and Zach Gali… something Greek… Galifianakis – if you really wonder). Which would be a shame, because Ben Stiller had some really good, funny movies, Tower Heist being the last, I think – I loved it, by the way. Sorry, guys, but I am just not wired to the kind of humor (‘toilet-humor’ or ‘jack-ass humor’) those two are representing, but as always, I am open to positive surprises. See for yourself: [youtube]http://youtu.be/BpjuIy_JReU[/youtube] This R-rated sci-fi comedy is centered on a group of neighbours who assemble the ‘neighbourhood watch’ that serves as a front for dads to get some male-bonding time away from their families, but after stumbling upon an alien invasion plot, they find themselves into a bit more trouble than they signed up for. The Watch will have its release on July 27th, 2012. Directed by Akiva Schaffer, based on a story by Jared Stern and scripted by Seth Rogen and Evan Goldberg, it also stars Vince Vaughn, Rosemarie DeWitt, Richard Ayoade, Will Forte and Billy Crudup.
Continue Reading
Advertisement
You may also like...
Related Topics:Akiva Schaffer, Ben Stiller, Billy Crudup, Jonah Hill, Richard Ayoade, Rosemarie DeWitt, Seth Rogen, The Watch, Tower Heist, Vince Vaughn, Will Forte, Zach Galifianakis