The first official “New Moon” trailer will air on MTV today at 9 P.M. ET during the MTV Movie Awards. Just to keep fans on their toes, not that they weren’t already, Summit Entertainment has released 15 seconds of the trailer shows lovers Bella Swan (Kristen Stewart) and gorgeous vampire Edward Cullen (Robert Pattinson)  meeting again, exchanging the words fans never heard them utter before, and then kissing. MTV promised to air it with a presentation from Robert Pattinson, Kristen Stewart and Taylor Lautner. On the same day at 7:45 P.M. PT (10:45 P.M. ET), the trailer will be making its rounds online via MySpace’s Trailer Park section. An action-packed, minute-long clip from Twilight showing Edward battling badboy bloodsucker James (Cam Gigandet) made its debut at last year’s awards. It was also the first time Pattinson and Stewart walked a red carpet together in support of the movie. Watch the 15 second “New Moon” clip below: [youtube]http://www.youtube.com/watch?v=Cuf4778vmIo[/youtube] Cast members in “The Twilight Saga: New Moon” include Robert Pattinson, Kristen Stewart, Taylor Lautner, Ashley Greene, Dakota Fanning, and Michael Sheen. Shelly Morrison, who won the job of the fan who is the MTV Movie Awards Insider, has just seen the full New Moon trailer.What does she have to say of what she saw?

I got to watch the “New Moon” trailer that will be airing on Sunday during the big show (airing live at 9 p.m. ET). Amazing! I loved it! It looks like director Chris Weitz has tried to incorporate as many elements from the book as possible, and – no worries – the vamps all look great. I was completely speechless at first. 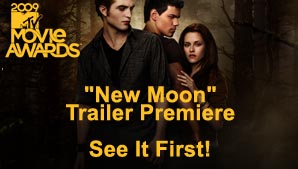