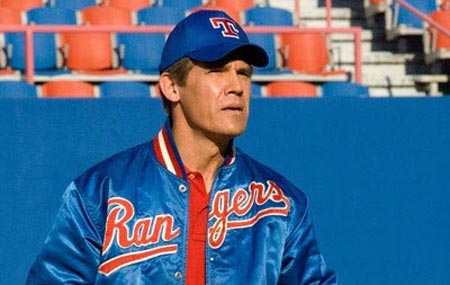 When it was revealed that Josh Brolin had been cast as George W. Bush in Oliver Stones my first thoughts were “Why the hell are they making a movie on George Bush?”, and secondly, “Josh Brolin doesn’t look anything like him. Brolin looks slightly intelligent for a start” but J.B. definitely resembles George W Bush in the upcoming “W” film, about the life of the current US President. In one of the two new pictures that we have for you, Brolin is dressed in a Texas Rangers jacket, the team that Bush co-owned. Whether you love him or hate him, there is no question that George W. Bush is one of the most controversial public figures in recent memory. In an unprecedented undertaking, acclaimed director Oliver Stone is bringing the life of our 43rd President to the big screen as only he can. “W” takes viewers through Bush’s eventful life – his struggles and triumphs, how he found both his wife and his faith, and of course the critical days leading up to Bush’s decision to invade Iraq. “W” stars Josh Brolin as George W. Bush, Elizabeth Banks as Laura Bush, James Cromwell as George Herbert Walker Bush, Ellen Burstyn as Barbara Bush, Thandie Newton as Condoleezza Rice, Jeffrey Wright as Colin Powell, Scott Glenn as Donald Rumsfeld, and Ioan Gruffud as Tony Blair.