Connect with us
USA Today has debuted the new poster for Indiana Jones and the Kingdom of the Crystal Skull, coming to theaters on May 22. The upcoming fourth action-adventure stars Harrison Ford, Shia LaBeouf, Cate Blanchett, Ray Winstone, Karen Allen, John Hurt and Jim Broadbent. Steven Spielberg is once again behind the camera. 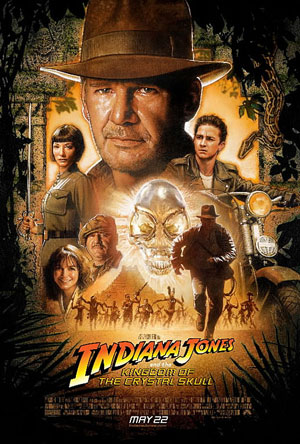 Here’s what the newspaper said:

The new poster for Indiana Jones and the Kingdom of the Crystal Skull confirms something alien is afoot. The first poster for the film (due May 22) featured part of the title relic, but there was always something odd about the eye socket. In the follow-up, also by sci-fi/fantasy movie artist Drew Struzan, it’s clear the skull is not at all human. Add to that the recent trailer, with its shot of a crate labeled “Roswell, New Mexico 1947,” and you don’t need to be a professor of archaeology to put the pieces together. Other clues: Looks as if our hero will face his least-favorite animal and the locals at some Maya ruins. Karen Allen (who also was in 1981’s original) seems to be enjoying herself, though.

Indiana Jones and the Kingdom of the Crystal Skull will hit theaters May 22, 2008.
Continue Reading
Advertisement
You may also like...
Related Topics: