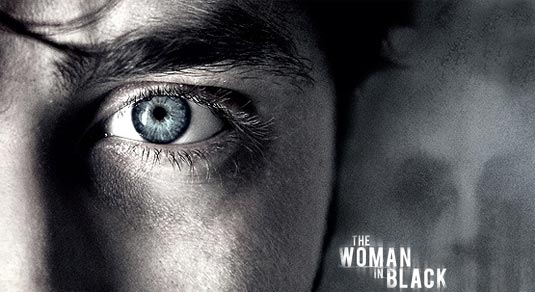 Check out the second poster for the upcoming horror movie The Woman in Black, Daniel Radcliffe‘s next starring role, based on a 1983 book by Susan Hill and was first adapted in 1989. The story follows a young lawyer, Arthur Kipps (Daniel Radcliffe), who is ordered to travel to a remote village and sort out a recently deceased client’s papers. As he works alone in the client’s isolated house, Kipps begins to uncover tragic secrets, his unease growing when he glimpses a mysterious woman dressed only in black. Receiving only silence from the locals, Kipps is forced to uncover the true identity of the Woman in Black on his own, leading to a desperate race against time when he discovers her true intent. Joining Daniel Radcliffe in the cast ensemble are Ciaran Hinds, Janet McTeer, Liz White, Alisa Khazanova, Tim McMullan, Roger Allam, Daniel Cerqueira, Shaun Dooley, Mary Stockley, Cathy Sara, David Burke, Victor McGuire, and Lucy May Barker. James Watkins (Eden Lake) is at the directorial helm with a screenplay by Jane Goldman. The Woman in Black is scheduled to hit theaters February 3, 2012.