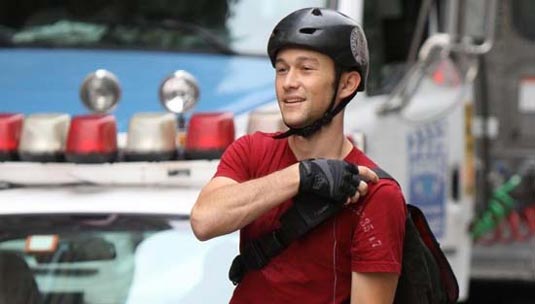 Columbia Pictures pushed the release date for Premium Rush back from January to late August this summer, and has now delivered a second trailer timed closer with this late release, just to remind us that it’s coming. Premium Rush stars Joseph Gordon-Levitt as Wilee, a NYC bike messenger who has a routine delivery turned into a life or death situation when he picks up a package that puts him in the sights of a dirty cop, played by Michael Shannon, who follows him around the city. I’m a big fan of Gordon-Levitt, and Michael Shannon who plays the film’s antagonist, is becoming a big name, it seems, but I’m still unable to get so hyped about this pic. Maybe because it is a bit implausible for me that he can outrun all that cars on a BIKE. In spite of the traffic jams and everything that might give him a boost. The trailer plays up the film’s high-octane thriller aspect while singling out a lot of bike stunts, but ‘I can’t help but feel like Premium Rush would have been more alluring during the X-Games boom in the 90s’, to cite a colleague from Collider. Though I’m willing to give it a shot, if only for Gordon-Hewitt. Co-written and directed by David Koepp (Secret Window), the film also stars Jamie Chung and Dania Ramirez. Premium Rush opens on August 24th, 2012.
Continue Reading
Advertisement
You may also like...
Related Topics:Dania Ramirez, David Koepp, Jamie Chung, Joseph Gordon-Levitt, Michael Shannon, Premium Rush