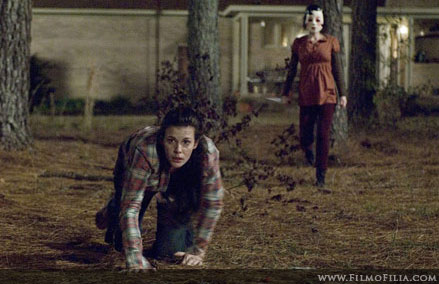 The first full length trailer for the upcoming thriller “The Strangers” has arrived online courtesy of Yahoo Movies. The thriller will star Liv Tyler, Scott Speedman, Gemma Ward and Glenn Howerton. Bryan Bertino is directing, based on a screenplay he wrote for Rogue Pictures. Plot Summary: The horrifying events that took place in the Hoyt family’s vacation home at 1801 Clark Road on February 11, 2005, are still not entirely known. Champagne. Rose petals. Candlelight. It was supposed to be a night of celebration for Kristen McKay (Liv Tyler) and James Hoyt (Scott Speedman). But after leaving a friend’s wedding reception and returning to the house, everything had collapsed for the happy couple. Then came a 4 a.m. knock on the door and a haunting voice. Is Tamara here? Writer/director Bryan Bertino explores our most universal fears in The Strangers, a terrifying suspense thriller about a couple whose remote getaway becomes a place of terror when masked strangers invade. The confrontation forces Kristen and James to go far beyond what they thought themselves capable of if they hope to survive. The Strangers will hit theaters May 30, 2008.
Continue Reading
Advertisement
You may also like...
Related Topics: