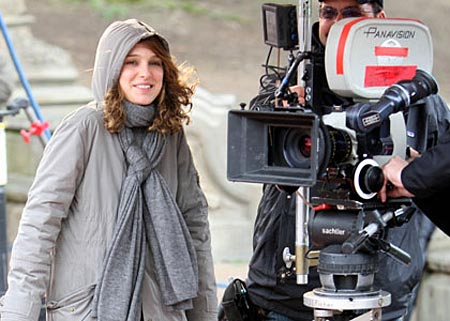 Take a look at the promo trailer for “New York, I Love You” from the producer of “Paris, je t’aime” that opened the 2006 ‘Un Certain Regard’ section of the Cannes Film Festival.

“New York, I Love You” is a collection of 12 short films that will be a cinematic love letter to the Big Apple.

Natalie Portman and Scarlett Johansson are making their directorial debuts and helming their own segments. Portman also plays a Jewish bride.

Shia LeBeouf with Julie Christie and John Hurt is in a segment scripted by the late Anthony Minghella, which he was also set to direct until his death. He is replaced by Shekhar Kapur.
Hayden Christensen, Rachel Bilson, Chris Cooper, Anton Yelchin, Ethan Hawke and Kevin Bacon will take acting roles, whilst X-Men 3 helmer Brett Ratner will direct a segment.