A couple of days ago we got our first look at Scott Cooper‘s upcoming Out of the Furnace thriller and today we have a look at the first poster for the film, as well as some new images. The poster features a close-up on a very somber Christian Bale with the line, ‘Sometimes your battles choose you.’ A gritty crime drama is set in Braddock, Pennsylvania and revolves around an ex-con steel worker Russell (Bale) and his younger brother Rodney (Casey Affleck) who have always dreamed of finding better lives despite the fact they live in the depressed Rust Belt town. The cast also includes Woody Harrelson, Zoe Saldana, Sam Shepard, Willem Dafoe, and Forest Whitaker. Bale told EW:

It seemed uplifting and tragic at the same time. In the midst of this crumbling town of Braddock, Pennsylvania, which people were deserting, (Russell) was somebody who was staying, and also staying with principles and loyalty that defined his life, regardless of the consequences. And therefore a very memorable individual.

Out of the Furnace opens in limited theaters on November 27th before a wider release on December 6th, 2013. Check out the poster and the images below – Bale, Saldana and Cooper setting up a scene on set, while Affleck shooting a fight scene.

Out of the Furnace tells a story about fate, circumstance and justice. Russell (Bale) and his younger brother Rodney (Affleck) live in the economically depressed Rust Belt, and have always dreamed of escaping and finding better lives. But when a cruel twist of fate lands Russell in prison, his brother is lured into one of the most violent and ruthless crime rings in the Northeast – a mistake that will almost cost him everything. Once released, Russell must choose between his own freedom, or risk it all to seek justice for his brother. 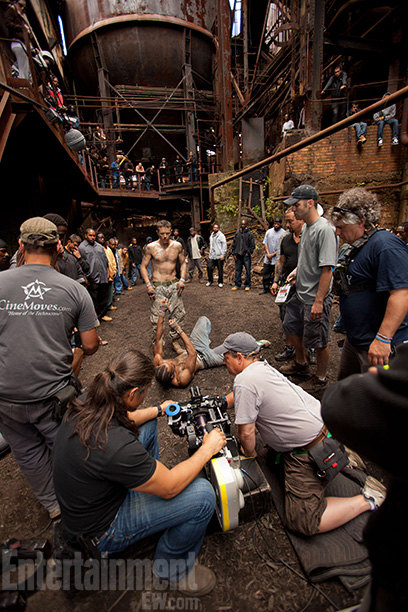