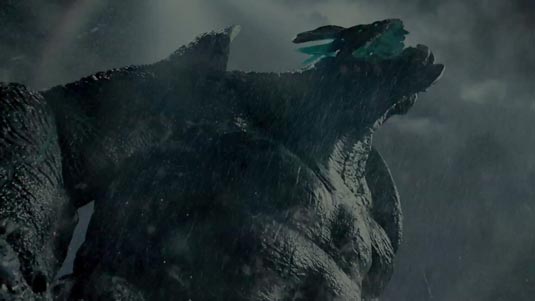 Warner Bros. has brought online a new TV spot for Guillermo del Toro‘s highly anticipated Pacific Rim, featuring new dialogue and stunning footage. The studio has already dropped the jam-packed trailer, TV spot and featurette two months before the release of a monsters-vs-robots picture. Del Toro also unveiled a large amount of detail surrounding the mythology of this futuristic apocalypse as well as numerous behind-the-scenes secrets. At this rate, from all of the footage we’ve seen from the movie it looks leaps and bounds beyond what we usually get from CG-heavy film. Pacific Rim stars Idris Elba, Charlie Hunnam, Rinko Kikuchi, Robert Kazinsky, Charlie Day and Max Martini. The summer blockbuster opens in 3D, 2D and IMAX theaters on July 12th, 2013. Pacific Rim, Man of Steel, Lone Ranger, Wolverine … This summer will be amazing! Check out some bits of new footage. Here’s the official synopsis: