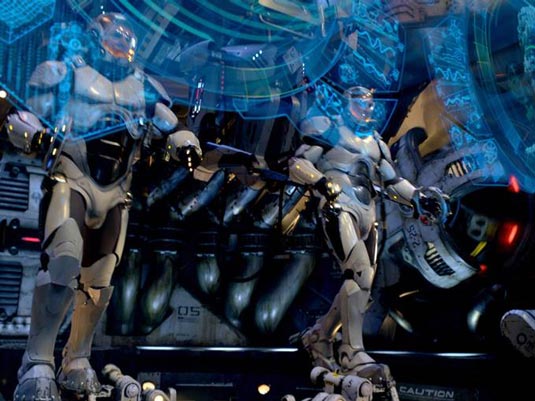 Have you ever wondered how exactly tiny humans operate the robotic Jaegers in Guillermo del Toro‘s Pacific Rim (or, for that matter, in any mecha anime)? That question might be answered in this new featurette, titled ‘Drift Space’, that we got thanks to IGN. In the video, which is just under three minutes long, you’ll see a whole lot of new footage from the film, as well as interviews with the directors and stars like Charlie Hunnam and Rinko Kikuchi. These two play Raleigh Becket and Mako Mori, Jaeger pilots – which we know by now are skyscraper-sized robots built to defend humanity from the Kaiju, giant Godzilla-like monsters that arise from an interdimensional rift (which happens to be deep in the Pacific Ocean) and promptly begin attacking population centers. The robots are so complex to operate, so a single human mind cannot process all that information, requiring two pilots for each Jaeger. This video represents an in-depth exploration of “drift space,” the headspace shared by the two pilots as they share a neural link. Del Toro explains,

“In order for the two bodies to be able to act as one, they need to share memories, instincts, fighting styles, and be able to become essential one.  You’re fused with the machine.”

“When you drift with someone, you create an incredibly poignant connection,”

Anyway, check it out and tell us what you think: Drift space. That’s quite a special device cooked up by screenwriter Travis Beacham, which immediately puts two characters in an interesting place.  Especially in the case of Raleigh and Mako, who are the two main characters – former is a washed-up Jaeger pilot, and the latter is a rookie whose entire family was wiped out in a Kaiju attack on Tokyo. They’re forced to work together when the impending apocalypse requires them to pilot a legendary, but hopelessly outdated Jaeger. Not every character in Pacific Rim is a pilot, however. Idris Elba plays a former pilot who has worked his way up the bureaucratic ladder, while Charlie Day is Dr. Newton Geiszler, an enthusiastic scientist and Kaiju expert. Del Toro’s ‘favourite actor’ Ron Perlman also plays a supporting role as Hannibal Chau, who traffics in illegal Kaiju body parts. Pacific Rim opens in 2D, 3D, and IMAX 3D on July 12th, 2013.