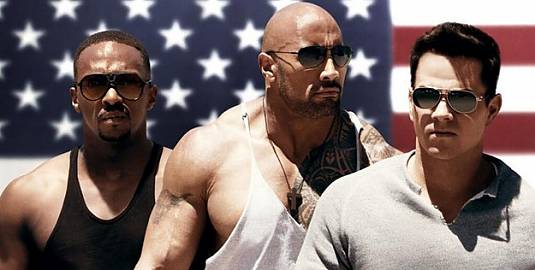 Two days ago we shared some cool TV spots for Michael Bay‘s upcoming Pain and Gain movie, which is set to hit theaters later this month, remember? Ok then, time for us to take another look at Wahlberg, Johnson and Mackie, ’cause a brand new one-sheet poster for the whole thing has arrived! Michael Bay directed the movie based on a true story, first told in an article from the Miami New Times which revolves around a group of bodybuilders who engaged in a campaign of kidnapping, extortion and murder in Florida. In other words – their American dream is bigger than yours! Let us once again remind you that Mark Wahlberg stars as Daniel Lugo, a regular bodybuilder who works at the Sun Gym along with his friend Adrian Doorbal, played by Anthony Mackie. Sick of living the poor life, he concocts a plan to kidnap a rich businessman Victor Kershaw, played by Tony Shalhoub, and extort money from him by means of torture. With the help of recently released criminal Paul Doyle, played by Dwayne Johnson, the Sun Gym Gang successfully gets Kershaw to sign over all his finances. But when Kershaw survives an attempted murder by the gang, he hires private investigator Ed Du Bois aka Ed Harris to catch the criminals after the Miami Police Department fails to do so. Pain & Gain is set to open on April 26th, 2013.

Second THIS IS THE END Poster
New THE GREAT GATSBY Poster!
Advertisement