The fact that Prince of Persia: The Sands of Time is opening on the same weekend as Sex and the City 2 got me thinking about mash-ups. Imagine, if you will, Jake Gyllenhaal‘s buff boy-toy Prince Dastan matching wits with Kim Cattrall’s wily cougar Samantha Jones. Or Gemma Arterton‘s Princess Tamina and Sarah Jessica Parker’s Carrie Bradshaw going on a shopping spree for Manolo Blahnik sandals at the local bazaar. And there are a few things Cynthia Nixon’s Miranda Hobbs could teach Ben Kingsley’s power-crazed Uncle Nizam about letting your work dominate your life…read more [cbs.ca] Inspired by Jordan Mecner’s video games, the story is set in ancient Persia and revolves around a scrappy street kid named Dastan (Will Foster) who’s adopted by the King Sharaman (Ronald Pickup). Dastan quickly grows up, the adult version played by Gyllenhaal. Raised alongside the King’s real sons, belligerent Tus (Richard Coyle) and the more sensible Garsiv (Toby Bebbell), and shown the tricks of the trade by his dad and uncle Nizam (Ben Kingsley), Dastan grows determined to show off his newly formed skills. He does this by leading the attack on Alamut, the city thought to be hiding major weapons (a not-so-subtle modern day Iraq parallel) but instead holding a much bigger secret, the mystical Sands Of Time (hence the title) which reverse, well, time. We’re off to the races when Dastan manages to grab the ancient glass dagger that holds the key to the Sands, but soon the King is killed and Dastan is wrongly accused of the deed. On the run he hooks up with the lovely Princess Tamina (Gemma Arterton) who, because of a proud family history, has a vested interest in protecting the dagger. Together they fight off numerous enemies, finally leading to an inevitable confrontation with the person really responsible for the King’s murder…read more [BoxOfficeMagazin] 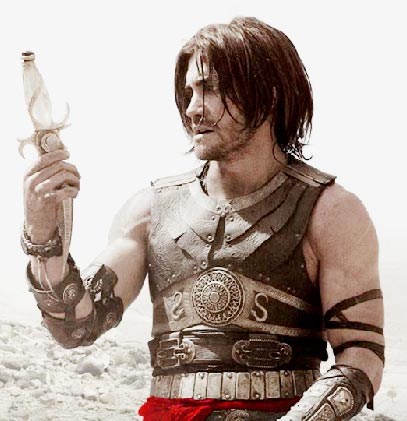 A case in point is Prince of Persia: The Sands of Time, which is just as convoluted as you’d fear of a film produced by Jerry Bruckheimer, based on a series of video games, and saddled with a colon in its title. It opens with a set of captions, then a voiceover to fill in yet more information, and finally a flashback to the hero’s childhood – three surefire indicators of a plot-clotted ordeal to come. In the flashback, the hero is an orphaned urchin who’s adopted by the ruler of ancient Persia. Years pass, and the lad grows up to be a musclebound, English accented, permanently unshaven Jake Gyllenhaal. When he’s framed for his adoptive dad’s murder – a crime which could have something to do with the dead king’s brother, Ben Kingsley – he goes on the run with an eligible princess, Gemma Arterton, who looks even less Persian than Gyllenhaal, however much orange fake tan she’s slathered on…read more [Independent]

Take everything you liked about the videogame Prince of Persia: The Sands of Time and throw it out the window. The plot, the characters, the larger than life set pieces, the time-stopping/rewinding action — take all that and throw it away. Now, replace it with Jake Gyllenhaal, a bunch of other white people and an ostrich race. What do you think the outcome will be? I’m guessing most of you have determined how this review of the movie version of Prince of Persia: The Sands of Time is going to go. However, if you’d like to see me tear into it like a rabid animal into a man’s flesh then hit the jump. I will also attempt to quell my anger at the fact that the film in an abomination of the videogame and try to review it as a summer action flick in the last paragraph. That might be fun…read more [Destructoid]

Ben Kingsley stars as Nizam in Prince of Persia: The Sands of Time …Nor is he the worst of Prince of Persia’s problems. Rarely has an action film felt more inert: assembled with the barest levels of competence, and devoid of the magic it clearly hopes to capture from the likes of Pirates of the Caribbean. Fault lies primarily with director Mike Newell who, when presented with the acrobatic choreography of the titular video game, proceeds to render it a perfunctory slog. The aesthetics call for someone with Jackie Chan’s flair, or perhaps a Parkour expert like Sebastien Foucan (who strutted his stuff in the opening chase of Casino Royale). More importantly, it requires a director who can stage and frame the various stunts in an engaging fashion: to recreate the sweaty-palmed excitement which the game evoked so well…read more [Mania] 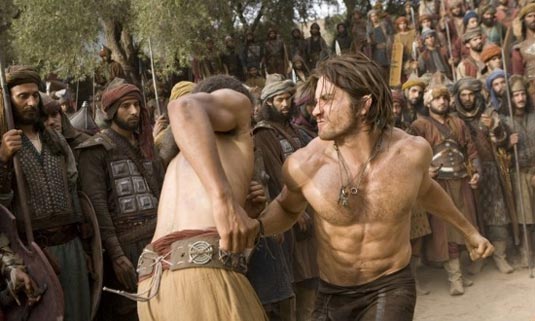 The biggest problem with all of this is the lack of climactic moments. The film flat lines the whole way through and the only reason the trailers even promise any kind of action is because they are able to condense a few promising action sequences only to have you learn they go nowhere inside the actual film. As a cohesive story this film works better than say the bumbling and stumbling Clash of the Titans from earlier this year, but at least that film tried to inject some energy, which is where I managed to have some fun with it. It had giant scorpions, winged horses, blind witches, etc. while Prince of Persia has this silly dagger and some goofy looking ostriches. There is simply no oomph to the story. It just sits there, sinking into the sand with every minute that passes by…read more [RopeOfSilicon] 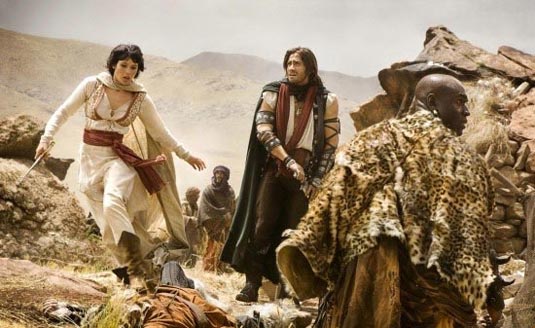 Gemma Arterton and Jake Gyllenhaal on set Prince of Persia: Sands of Time So the first half of the movie we spend time getting to know these repulsive characters (and everyone in the flick is unlikable, not just Dastan and Tamina), and then the film goes outright stupid. But here’s the thing: the audience I saw it with loved the movie The applauded multiple times throughout. And not ironically. They were genuinely swept up in what I found to be one of the most dull, unimaginative, bland “adventure” movies I’ve seen in quite some time. Perhaps it’s because I’m a critic and I’ve seen more movies so it’s harder to please me. But I honestly don’t know what merited such a positive response. I know there’s a disconnect at times between general audiences and film critics where the general opinions of one are wildly divergent with the opinions of the other. So maybe you’ll come back here and tell me I’m stupid because you thought the movie was awesome. Go ahead. I’ll be off having fun rather than cheering on a movie that needs cheat codes for excitement, people worth caring about, fun dialogue, and joy. Maybe instead of unlocking a magic dagger, the characters should have sought out a Game Genie…read more [Collider]

Prince of Persia: The Sands of Time, Gemma Arterton as Tamina There are plenty of instances where Prince of Persia: The Sands of Time gives away its video game origins. The “prince,” played by Jake Gyllenhaal, scales walls and bounces over rooftops in novel ways any gamer will recognize. And he goes on a quest to return a talisman to its place of origin, a staple of fantasy in the video game age. The stunts are heart-racing foot chases (Persian parkour) and zippy state-of-the-art scimitar fights. But this Jerry Bruckheimer production is also old fashioned, in some good and not-so-good ways. Prince of Persia has a high body count and graphic violence (beheadings, impalings). But as it borrows gags from Raiders of the Lost Ark and other sandy action epics, the tone tends to be light, the dialog comically arch…read more [Orlando Sentinel]