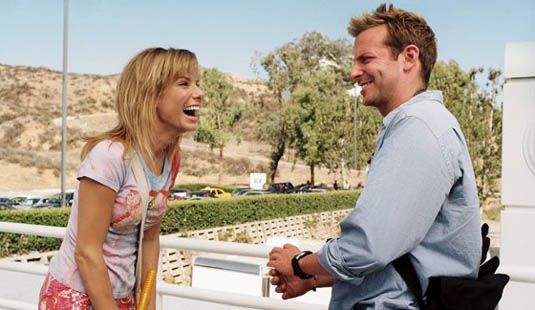 Razzie Awards 2010 winners have been announced.

Sandra Bullock, nominated for a Best Actress Oscar at this year’s Academy Awards for The Blind Side, won two – Worst Actress in All About Steve and Worst Screen Couple shared with Bradley Cooper.

Since this is the Razzies’ 30th anniversary year, special awards were given for worst picture of the decade Battlefield Earth, based on the writings of Scientology creator L. Ron Hubbard.

Comedian Eddie Murphy and Paris Hilton were named the worst actor and actress of the 2000s, respectively.

Beyonce – Obsessed
Sandra Bullock – All About Steve
Mylie Cyrus – Hannah Montana: The Movie
Megan Fox – Jennifer’s Body” and “Transformers: Revenge of The Fallen
Sarah Jessica Parker – Did You Hear About The Morgans?

Bullock had said that she would accept her award in person if she won, and she was there showing good humor!

She arrived on stage pulling a wagon filled with DVDs of All About Steve.

“Something tells me you all didn’t watch the film. I thought no one went to see this film, but I know that there are more than 700 members here. That means that the majority of the 700 cast their vote, so that means 352 …?”

She asked the audience members to watch it, rethink their decision and if they agree that she really wasn’t that bad, “I will come back next year. I will give back the Razzie,” she was great!

And, no, she doesn’t deserve it! Especially not now – No performer has ever won a Razzie and an Oscar the same year.

On the other hand, Bullock already won Golden Globe award for the actress for The Blind Side. Despite her Golden Globe win, she insists she won’t be taking home an Oscar at this year’s Academy Awards.

Any two (or more) Jonas brothers – The Jonas Brothers 3-D Concert Experience
Sandra Bullock & Bradley Cooper – All About Steve
Will Ferrell & any co-star, creature or “comic riff” – Land of The Lost
Shia LaBeouf & Either Megan Fox or any Transformer – Transformers: Revenge of The Fallen
Kristen Stewart & either Robert Pattinson or Taylor Whatz-His-Fang – Twilight Saga: New Moon

WORST PICTURE OF THE DECADE

WORST ACTOR OF THE DECADE

Mike Myers – Nominated For 4 “achievements,” “winner” of 2 Razzies for “Cat In The Hat,” “The Love Guru”

WORST ACTRESS OF THE DECADE

Mariah Carey – The single biggest individual vote getter of the decade: 70+% of all votes for worst actress of 2001 for “Glitter”

Paris Hilton – Nominated For 5 “achievements,” “winner” of 4 Razzies for “The Hottie & The Nottie,” “House of Whacks,” “Repo: The Genetic Opera”

Lindsay Lohan – Nominated For 5 “achievements,” “winner” of 3 Razzies for “Herbie: Fully Loaded,” “I Know Who Killed Me,” “Just My Luck”

Madonna – Nominated For 6 “achievements,””winner” of 4 Razzies for “Die Another Day,” “The Next Best Thing,” “Swept Away”