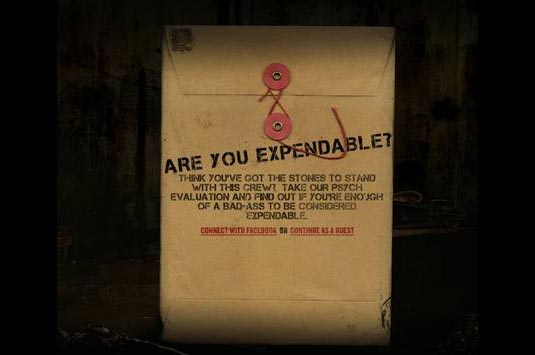 Lionsgate has released the first clip for The Expendables titled “Boat Gunfight”. Starring Sylvester Stallone, ‘Stone Cold’ Steve Austin, Randy Couture, Dolph Lundgren, Jet Li, Jason Statham, Terry Crews and Mickey Rourke, The Expendables centrs on a team of mercenaries hired to infiltrate a South American country and overthrow its ruthless dictator. Written, directed by, and starring Sylvester Stallone, The Expendables also stars Eric Roberts, Steve Austin, David Zayas, Giselle Itie, Charisma Carpenter and Gary Daniels. Arnold Schwarzenegger and Bruce Willis also appear in cameos. Plot Concept: Barney Ross (Stallone) is a man with nothing to lose. Fearless and void of emotion, he is the leader, the sage and the strategist of this tight-knit band of men who live on the fringe. His only attachment is to his pickup truck, his seaplane and his team of loyal modern-day warriors. His is a true cynic who describes what he does as “removing those hard to get at stains.” The team behind him is made up of Lee Christmas (Jason Statham), former SAS and a savant with anything that has a blade; Yin Yang (Jet Li), a master at close-quarter combat; Hale Caesar (Terry Crews), who has known Barney for ten years and is a long-barrel weapons specialist; Toll Road (Randy Couture), a skilled demolitions expert and considered the intellect of the group; and Gunnar Jensen (Dolph Lundgren), a combat veteran and an expert in precision sniping who struggles with his own demons. When the mysterious Church offers Barney a job no one else would take, Barney and his team embark on what appears to be a routine mission: overthrow General Gaza (David Zayas), the murderous dictator of the small island country of Vilena and end the years of death and destruction inflicted on its people. On a reconnaissance mission to Vilena, Barney and Christmas meet their contact Sandra (Giselle Itie), a local freedom-fighter with a dark secret. They also come to learn who their true enemy is: rogue ex-CIA operative James Monroe (Eric Roberts) and his henchman Paine (Steve Austin). When things go terribly wrong, Barney and Christmas are forced to leave Sandra behind, essentially giving her a death sentence. Haunted by this failure, Barney convinces the team to return to Vilena to rescue the hostage and finish the job he started. And to perhaps save a soul: his own. [youtube]http://www.youtube.com/watch?v=dm777hwZ0Ws[/youtube] In addition, Lionsgate has just launched a cool new interactive feature that will really make you feel like you’re apart of the team! The Are You Expendable? quiz gives you the chance to find out which member of the Expendables you are most like. After answering a series of questions, you will be given a classification, an official Expendables nickname and the ability to upload your own photo into the Legends poster. Log-in using Facebook Connect to share with friends or try it out as a guest. http://www.expendablesthemovie.com/areyouexpendable/ Either way, this is your opportunity to join the notorious crew! The Expendables is scheduled to hit theaters on August 13, 2010.
Continue Reading
Advertisement
You may also like...
Related Topics:Arnold Schwarzenegger, Bruce Willis, Dolph Lundgren, Eric Roberts, Gary Daniels, Jason Statham, Jet Li, Mickey Rourke, Randy Couture, Sylvester Stallone, Terry Crews, The Expendables