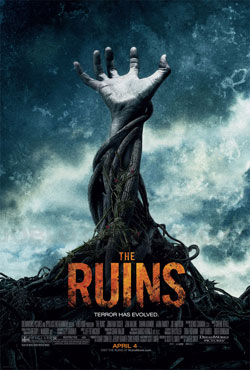 Slowly but surely, juicy new material is turning up for the upcoming skin crawler of a horror film, ‘The Ruins‘ – and neither is managing to impress at the minute.The film sees four ‘explorers’ (is that what they call grubby student backpackers now?) visit an archaeological site in Mexico only to wind up facing the usual ancient evil that plagues the area. No sooner than you can say, “you shouldn’t be there, you idiots” do the fresh faced foursome find themselves having to operate on themselves to remove an ancient parasite that will eventually kill them all. Girls scream, boys cry, usual downright nastiness ensues.

WorstPreviews have come across a red band trailer for the film that isn’t necessarily horrible to watch, more a list of reasons why the film is looking an awful lot like ‘Cabin Fever’, with friends turning on one another and waking up to discover that that rash they seem to have got hasn’t gone down at all.

Continue Reading
Advertisement
You may also like...
Related Topics:Horror