It looks like the crocodile movie “Rogue” is still alive and looking to appear in theaters. At one point, the film was almost released straight to DVD, but instead ended up setting an April 25th theatrical release and has now unveiled a posters, featuring the mighty croc. 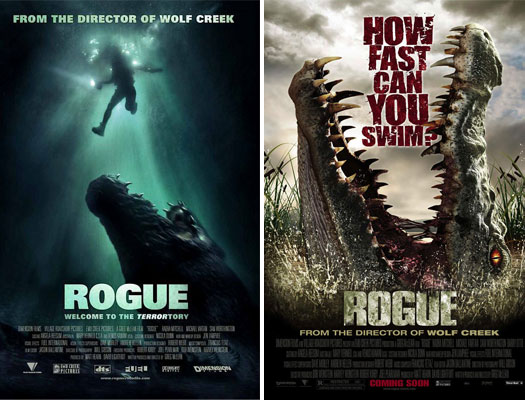 Synopsis: While doing his latest piece, a cynical American travel writer named Pete (Michael Vartan) joins a group of tourists on a river cruise in the Australian Outback. His personality immediately clashes with the feisty female tour captain named Kate (Radha Mitchell), who regards him with a fair amount of disdain. As their uneventful cruise winds to a close, Kate is reluctantly persuaded to venture out into unexplored territory. The detour leads to a discovery of a secluded lake, but it also leads to disaster when something strikes the boat from below, causing it to start sinking. Kate is forced to evacuate everyone on a tiny mud island. As darkness approaches, so does the tide, and the group realizes that the dry bit of land provides only a temporary refuge. True panic strikes when everyone discovers that they are actually in the heart of a terrifying, man-eating crocodile’s lair. Pete and Kate find themselves working together and motivating the group to attempt a daring escape.

The film is written and directed by Greg McLean, the man behind the 2005 horror movie “Wolf Creek.”