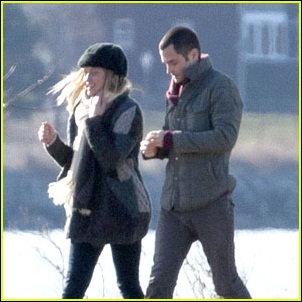 The film is currently scheduled to shoot through Christmas in Detroit and in the photo on the right, you can see Badgley and Palmer walk back to their trailers after filming a few scenes on Wednesday afternoon (December 5) in Detroit, Mich. Parts Per Billion marks Horiuchi’s directorial debut and is structured with interwoven stories like Magnolia and Crash, following three couples whose encounter with a ‘reality-shaking event’ will rip their relationships apart. The characters names will be Len, Mia, Andy, Esther, Anna and Erik, but the press release doesn’t say which roles the new cast members will be playing. Also check out the first photos below.