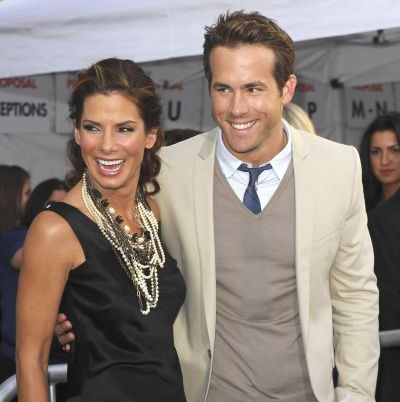 They already describe this project as “new action comedy.” And guess who stars in it? The last year’s Proposal comedy – couple Sandra Bullock and Ryan Reynolds! And guess what (again)!!! Proposal director Anne Fletcher is in talks to direct the project, which was reportedly purchased for $1 million by Universal on Friday. So, that does sound like Bullock and Reynolds are making The Proposal again, but, wait, there’s still something new about this project! New title – Most Wanted! So, what do we know about this story? We know that in Most Wanted, Reynolds would play “an FBI agent ordered to escort Bullock’s character, a suspected criminal, to court and the two are forced to go on the run after they are ambushed.” Reynolds will executive produce this comedy together with his partner Jonathan Komack Martin, and Mandeville Films, the company behind (guess what project) The Proposal will produce. The studio and production company closed a deal with (surprise!) Proposal screenwriter Peter Chiarelli for the upcoming movie. This project will mark Bullock’s first film since her Oscar-winning turn in last year’s The Blind Side which grossed nearly $256 million at the domestic box office, while Reynolds is busy filming the Green Lantern which hits theaters on June 17, 2011. Ok, we’re joking a little bit here, but we definitely like this idea. We like Sandra Bullock, and it’s nice to hear she’s so busy these days. Another romantic comedy? Sure! At least we know that 2009 Proposal was a huge success, so we could only hope Most Wanted will repeat it!
Continue Reading
Advertisement
You may also like...
Related Topics:Anne Fletcher, Ryan Reynolds, Sandra Bullock