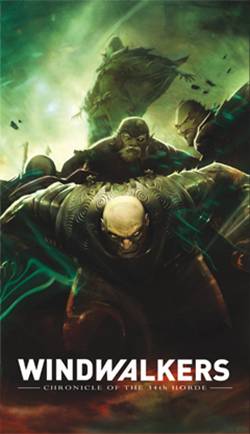 Funs of the Sci-fi, this epic animated fantasy will blow your minds! It is a stunning adventure flick mixing 3D realism and 2D graphics, a hybrid of hard science fiction and heroic fantasy. What else to say besides Windwalkers — Chronicle of the 34th Horde is just what the doctor orders!

Magali Helle wrote the initial script and the producers are now in negotiations with another screenwriter. Kounen has kept busy and helmed a teaser for the film as well. And, wow! Marc Caro (Delicatessen, The City of Lost Children) came on board to art direct the visual effects for the entire film.

Damasio has designed a world in which the wind is ever-present. The narration is not told from a single point of view and each one of the 23 characters gets a go. And this is about to be a kind of road movie.

23 characters which have been living beside each other for over 30 years, who know no life than fighting the wind, going forward no matter what, who don’t always get along, who love, hate and don’t understand each other. But the purpose of their mission is a religious one and this is an exciting story about faith, friendship, hardships and science. Also the mythology and technology Damasio creates around the wind and the way the team tries and often fails to adapt to its raging strength is truly supreme.

The Windwalkers pre-production was launched in September and the film will be filmed in English.

There have been thirty-three attempts in eight hundred years, thirty three Hordes that have failed. Sol, one of the characters, speaks to us today in the name of the thirty-fourth, and most probably the last… These, I assume, are the most probably eyes of a guy named Sol:

Here is another version of the poster, plus some concept art: