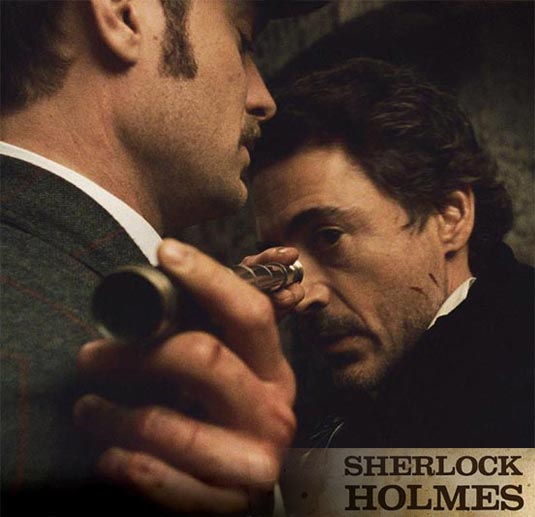 Schlock Holmes is too brutal. Call it instead The Adventure of the Da Vinci Code Knock-off or The Adventure of the Missing Ending. Either would be equally appropriate. This original story, which borrows heavily from Sir Arthur Conan Doyle’s “canonical” tales, contains multiple Easter Eggs for Holmes fans but fails in the bigger picture: developing a credible narrative. Unduly influenced by both comic books and The Da Vinci Code, Guy Ritchie’s “re-interpretation” of Holmes feels more spastic than kinetic. The camera rarely stops moving and, when it does, the weaknesses of the script become apparent. Conan Doyle wrote 60 adventures starring his famous detective (56 short stories, four novels). Some were preposterous, but none were quite as silly as this one, which at times feels more like overwrought fan fiction than a fully developed Sherlock Holmes tale…read more [ReelViews] Robert Downey Jr. sounds that self-destructive eccentricity as a keynote from his first appearance in Sherlock Holmes, and his twitchy, winning performance returns to it throughout the film. The interpretation veers sharply away from the tweedy expectations set by Basil Rathbone and others, but it’s as true in its own way to the source. Holmes is a man only fully engaged by life when it offers a direct challenge…read more [A.V. Club]

Robert Downey Jr. stars as Sherlock Holmes and Jude Law stars as Dr. John Watson in Sherlock Holmes “Sherlock Holmes” goes wrong in many ways except for one — at the boxoffice. Credit action uber-producer Joel Silver for recognizing that the only way to revive Sherlock Holmes for contemporary audiences is by turning him into Jason Bourne and hiring someone like Ritchie to overload the senses with chases, fights, effects, editing, bombastic noise and music. Warner Bros. should have a large hit this holiday season with “(Not) Sherlock Holmes”…read more [THR] If you can get over the idea of Sherlock Holmes as an action hero — and if, indeed, you want to — then there is something to enjoy about this flagrant makeover of fiction’s first modern detective into a man of brawn as much as brain. To say that this is not grandpapa’s Sherlock Holmes will be either irrelevant or a plus for most of the intended audience, who know the iconic Victorian/Edwardian-era sleuth by reputation if at all. A good number of Robert Downey Jr.’s “Iron Man” fans will likely follow him here, as he turns the venerable deerstalker-capped and becaped figure into a gym-toned, half-deranged Holmes unlike any seen before. Worldwide prospects look potent…read more [Variety]

James Fox stars as Sir Thomas and Robert Downey Jr. stars as Sherlock Holmes in Sherlock Holmes Ritchie’s Sherlock Holmes is a far more action-orientated and slapstick take on previous entries – and the boxing fight does still jar – but he has a secret weapon up his sleeve. Downey Jr. is an absolute delight as Sherlock Holmes. While he and Law have great fun as the bitching and bickering pair (it’s very bro-mantic), the ‘Iron Man’ star doesn’t just coast on their chemistry. He scratches the surface just a little bit deeper to uncover a pained and somewhat insecure Sherlock Holmes. Downey Jr’s detective is happiest with the only one that understands him and, when Watson threatens to leave, there is something childishly endearing about his quest to sabotage his ally’s relationship. He is a man whose instinctive need to deduce everything at any time and place makes him somewhat socially redundant, and explains fully why he spends most of his time by himself honing his intelligence as a defence mechanism. It gives the playful tone of the film a much-needed edge…read more [Yahoo movies]

Robert Downey Jr. stars as Sherlock Holmes and Rachel McAdams stars as Irene Adler in Sherlock Holmes Still, the real relationship here is between Holmes and Watson, and it’s here this Sherlock really finds its home: as a lightweight, capricious buddy picture. Each new Jude Law movie may appear to be an excuse for the tabloids to give him a kicking, but this time it’s him dishing out the beating. A very smart choice for him, playing second fiddle as opposed to main event, Sherlock gives you the chance to again appreciate his real screen skills. He delivers charm, vim and matinee idol verve, making for a more muscular Watson than previous incarnations and providing a welcome straight-man and plain speaker when Holmes’ eccentricities occasionally become too much. Here’s looking forward to seeing him and Downey Jr embark on a more exotic adventure next time out…read more [Empire]

Jude Law stars as Dr. John Watson in Sherlock Holmes The world’s most famous fictional detective returns to the big screen bearing six-pack abs and an effects-heavy action story, but this adrenalised Sherlock Holmes lacks the intelligence of its brilliant titular hero. Robert Downey Jr lends his not-inconsiderable wit to the proceedings as the brawny, brooding Holmes, but despite director Guy Ritchie’s robust re-imagining, this picture struggles to transplant the 19th-century sleuth into the world of 21st-century Hollywood blockbusters. Opening on Christmas Day in the US (and the following day in the UK), this Warners release seems poised to become a sizable hit among action audiences, although Avatar could bite into that demographic. Even so, Sherlock Holmes is aiming at a wide base with its starry cast, love story, and a contemporary attitude towards its beloved central character…read more [ScreenDaily]

Eddie Marsan stars as Inspector Lestrade and Robert Downey Jr. stars as Sherlock Holmes Sherlock Holmes Ritchie has defied his critics, however, by delivering a delightful romp of a movie, due in no small part to its assured direction. He has created London at the end of the nineteenth Century is glorious detail – perfectly capturing the city during its heyday, expanding under rapid construction, while nurturing a hotbed of crime, decadence and mystery that spreads through everyone from the beggars and street walkers to Parliament and the Aristocracy. At the centre of the film, however, is the brilliantly shaped relationship between Holmes and Watson – a tender friendship that over many years has evolved into a bickering, shamelessly co-dependant bond nothing short of a marriage. Robert Downey jr. and Jude Law are both wonderful in their roles, sparring with pithy banter, playful jibes, yet a continuous underlying affection that creates genuine onscreen chemistry…read more [Twitch]

Mark Strong stars as Lord Blackwood in Sherlock Holmes The action in Sherlock Holmes comes in three varieties… verbal, fight scenes, and set-pieces. The verbal sparring courtesy of Holmes and Watson is stellar with the two conversing with an energetic wit that helps keep the viewer’s attention firmly on the actors and their playful performances. The fights include the highs of a buff and believable Downey scrapping with hooligans in and out of the boxing ring and the lows involving some incredibly tight shots and fast editing that occasionally leave you unsure as to the details of the brawl. Director Guy Ritchie (Snatch, RocknRolla) keeps his usual stylistic flourishes in check for most of the film but lets them loose for a couple fight scenes when he slows the film down to show Holmes mentally visualizing his attack then replays it at normal speed as it actually happens. The effect works really well and Ritchie resists the urge to overuse it…read more [FilmSchoolRejects] Sherlock Holmes Video Review: [youtube]http://www.youtube.com/watch?v=mcxI2_6qWYo[/youtube] Sherlock Holmes Video Review by Jenna Busch & George ‘El Guapo’ Roush [Joblo]: [youtube]http://www.youtube.com/watch?v=Xp_8WhtbRIY[/youtube]
Continue Reading
Advertisement
You may also like...
Related Topics:Arthur Conan Doyle, Eddie Marsan, Guy Ritchie, Joel Silver, Jude Law, Mark Strong, Rachel McAdams, Robert Downey Jr., Sherlock Holmes

Avatar Review
Did You Hear About The Morgans? Review
Advertisement