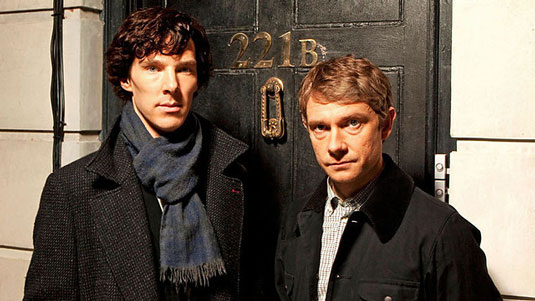 There has finally been confirmation of a new series of the BBC One hit series, Sherlock. Though, it was more the question of WHEN, not IF (with writing taking place, reportedly, near the end of last year), what with its stars being busy with other projects – Benedict Cumberbatch has been in Germany for the Wikileaks movie The Fifth Estate, while Martin Freeman has been preoccupied with The Hobbit trilogy. But somehow, it has all been finally put together and initial read-throughs will start next Monday, a few months after its original shooting date, but better late than never. Not only it was a problem to wrangle actors, but there have been some problems with directors, too. Namely, Paul McGuigan, who directed four of the first six episodes, won’t be on board for the third season because he’s filming the newest Frankenstein film. Jeremy Lovering (who has recently directed episodes of Doctor Who) will step in for the first two episodes, which are scheduled to film before summer, and a final one will shoot afterwards. The series is set to return in the winter. The second season of Sherlock ended with Holmes stepping off of a building and everyone thought he died (at least, as far as Watson knew), but obviously, he didn’t. Of course, it would be one of the biggest mysteries to be, hopefully, answered in the next season – how he pulled it off. Another one would be – what will happen regarding Moriarty? If you remember, this was also part of the plot in the previous version of Sherlock Holmes, with Jeremy Brett as titular detective. So, if you’re anxious and can’t wait to see the next Sherlock season, you might take a look (if you haven’t seen it before) or go down the memory lane with the golden oldie.