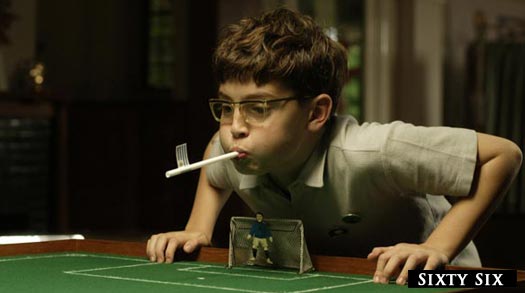 Some movies from abroad take time to reach US shores. Well it took 2 years to “Sixty Six” to do so! “Sixty Six” is a comedy coming from the United Kingdom. The movie, directed by Paul Weiland (“Four Weddings and a Funeral” and “About a Boy“). England, the summer of ’66 and the country is about to be consumed by World Cup Fever. For 12-year-old Bernie the biggest day of his life is looming, the day he becomes a man – his Bar Mitzvah. But his plans for the perfect day begin to go awry when his father’s business starts to fail, forcing the family to scale back on their plans. Even more disturbing, the World Cup Final is scheduled for the same day as his passage into manhood. Parents Manny and Esther (Eddie Marsan and Helena Bonham Carter) assure Bernie that England won’t possibly make the finals, and refuse to change the date of the Bar Mitzvah. Bernie’s only solace comes from his relationship with asthma specialist, Dr Barrie (Stephen Rea). As the big day approaches, everything seems to be going perfectly wrong: Manny’s business fails and the family home catches fire, and older brother Jimmy has a serious injury. And to everyone’s shock, England keeps winning games and inching towards the climactic final round. As his parents realize just how much they have let Bernie’s once-in-a-lifetime moment fall by the wayside, they come up with their own ambitious plan to make Bernie’s Bar Mitzvah day one to remember. “Sixty Six” now it’s finally making its way to the states and will arrive in theaters on August 1.