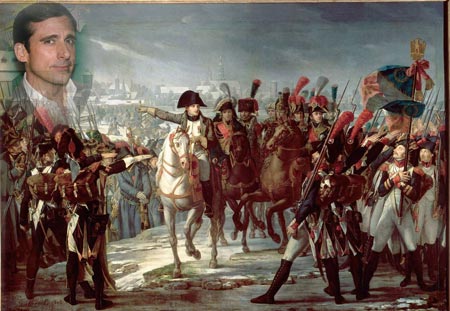 Steve Carell is considering starring the upcoming comedy “Brigadier Gerard.” Media Rights Capitalis developing the film and is hoping for a spring 2009 production start. “King Of The Hill” TV writers John Altshuler and David Krinsky (Blades of Glory) have based the script on short stories originally penned by Sherlock Holmes creator Sir Arthur Conan Doyle. Brigadier Gerard, who was the subject of a series of short stories published between December 1894 and September 1903, is to be the subject of a new film starring Steve Carell, who looks to be the perfect choice for the role. Conan Doyle’s creation is a French soldier fighting during the Napoleonic wars, who mistakenly believes he is the bravest soldier and greatest swordsman, horseman and lover in the whole of France. Producers are currently seeking a director. Carell plans to star in one or two films during his hiatus after shooting the fifth season of NBC sitcom The Office. Possible candidates are Gerard, Date Night and a possible Get Smart sequel.
Continue Reading
Advertisement
You may also like...
Related Topics:Arthur Conan Doyle, Steve Carell