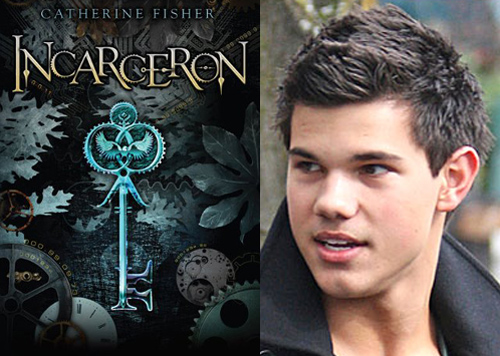 Taylor Lautner fans, check this out! Young actor is attached to star in Fox 2000’s adaptation of the Catherine Fisher young adult novel Incarceron, where he will play a seventeen-year-old Finn, jailed in Incarceron. Adam Cooper and Bill Collage are adapting the Catherine Fisher novel, which was first published in UK in 2007 and quickly shot up the best-seller charts when it was published in America in February. Here’s the Incarceron novel synopsis: “Incarceron is a prison so vast that it contains not only cells, but also metal forests, dilapidated cities, and vast wilderness. Finn, a seventeen-year-old prisoner, has no memory of his childhood and is sure that he came from Outside Incarceron. Very few prisoners believe that there is an Outside, however, which makes escape seems impossible. And then Finn finds a crystal key that allows him to communicate with a girl named Claudia. She claims to live Outside- she is the daughter of the Warden of Incarceron, and doomed to an arranged marriage. Finn is determined to escape the prison, and Claudia believes she can help him. But they don’t realize that there is more to Incarceron than meets the eye. Escape will take their greatest courage and cost more than they know.” At the end let us add that actor Hugh Jackman is in charge for producing along with John Palermo. At this moment no director is attached, and a production schedule wasn’t revealed either. But, as usual, we’ll keep an eye on this project, so stay with us!
Continue Reading
Advertisement
You may also like...
Related Topics:Hugh Jackman, Incarceron, Taylor Lautner