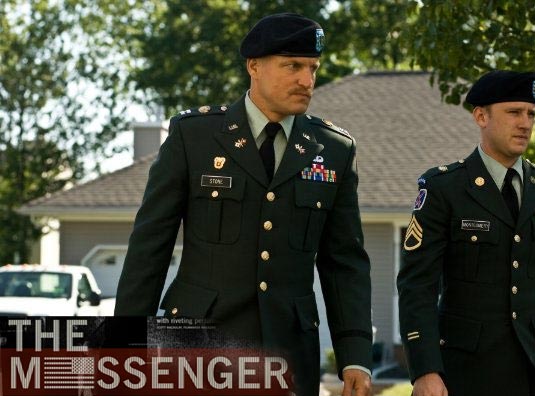 Oscilloscope has just debuted the official trailer for Iraq War drama “The Messenger“. Ben Foster stars as Will Montgomery, a U.S. Army officer who has just returned home from a tour in Iraq and is assigned to the Army’s Casualty Notification service. Partnered with fellow officer Tony Stone (Woody Harrelson) to bear the bad news to the loved ones of fallen soldiers, Will faces the challenge of completing his mission while seeking to find comfort and healing back on the home front. When he finds himself drawn to Olivia (Samantha Morton), to whom he has just delivered the news of her husband’s death, Will’s emotional detachment begins to dissolve and the film reveals itself as a surprising, humorous, moving and very human portrait of grief, friendship and survival. “The Messenger” marks the directorial debut of Oren Moverman, who also co-wrote the screenplay with Alessandro Camon. The film that won Silver Bear for Best Screenplay from Berlin International Film Festival 2009. “The Messenger” will open in limited theaters starting on November 13th, 2009.
Continue Reading
Advertisement
You may also like...
Related Topics:Ben Foster, Samantha Morton, The Messenger, Woody Harrelson