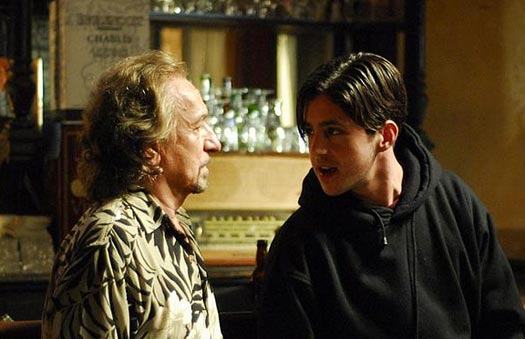 “The Wackness” has a new red band trailer. This trailer is much better than the previously released green band versions, showing off a bit of the film’s edge. It’s the summer of 1994, and the streets of New York are pulsing with hip hop and wafting with the aroma of marijuana. The newly-inaugurated mayor, Rudolph Giuliani, is only beginning to implement his initiatives against crimes such as noisy portable radio, graffiti and public drunkenness. “The Wackness” centers upon a troubled high school student named Luke Shapiro (Josh Peck)-a teenage marijuana dealer who forms a friendship with Dr. Jeffrey Squires (Ben Kingsley), a psychiatrist and kindred lost soul. When the doctor proposes Luke trade him marijuana for therapy sessions, the two begin to explore both New York City and their own depression. “The Wackness” is written and directed by Jonathan Levine, who is also the man behind “All the Boys Love Mandy Lane.” His new movie has already appeared at the Sundance Film Festival, where it won the Audience Award and was nominated for the Grand Jury Prize. You can catch it in theaters on July 3rd, in limited release.
Continue Reading
Advertisement
You may also like...
Related Topics:Ben Kingsley, jonathan levine, josh peck, Sundance Film Festival, The Wackness