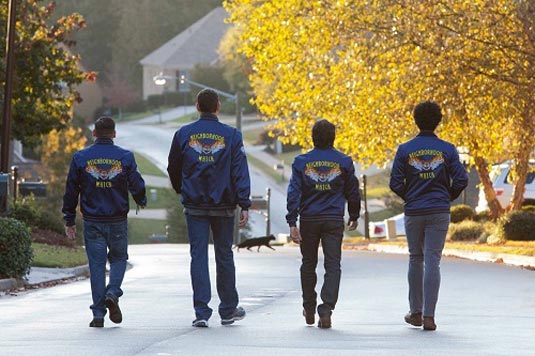 The Watch comes to theaters this Friday, so director Akiva Schaffer decided it’s not too late for one last bit of new footage from the film, just to jab at your interest in seeing it. And because he is a veteran of the Lonely Island (the comedy troupe that knows better than anyone how to use the Internet to their advantage), the new promo for The Watch isn’t your average red-band trailer, but a collection of very obscene cuts that you won’t see in the film – introduced by Schaffer himself. Take a look at the two minutes of these so NSFW scenes below: [youtube]http://youtu.be/tr2xoh239pU[/youtube] The main appeal of this movie is seeing two out of four (can’t make my opinion on Richard Ayoade yet – haven’t seen him in a movie to this day) quite funny guys fooling around and getting into trouble – at a certain point you might not even need a plot for a movie like this – jokes would be quite enough for a summer movie. For better or for worse, though, The Watch does have a plot. The story follows four guys who organize themselves into patrol, roaming around their neighborhood and trying to keep it safe, only to be totally unprepared when an alien invasion takes over. The Watch comes to theaters this Friday – July 27th, 2012 and it stars Ben Stiller, Vince Vaughn, Jonah Hill, Richard Ayoade and others.
Continue Reading
Advertisement
You may also like...
Related Topics:Akiva Schaffer, Ben Stiller, Jonah Hill, Richard Ayoade, The Watch, Vince Vaughn