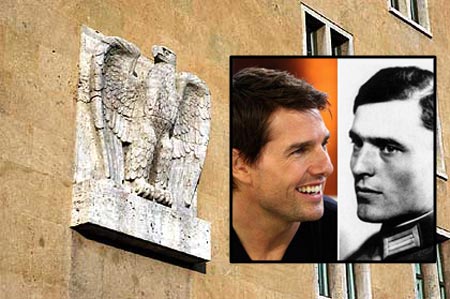 A movie in which Tom Cruise, 46, plays a true-life German Second World War hero will not reach screens till February 2009, the producers said as Germans were getting ready to mark the 64th anniversary of the anti-Hitler plot. “Valkyrie” was meant to launch this summer as public interest grows in the failed bid to assassinate the Nazi dictator on July 20, 1944. The German armed forces revere the chief plotter, Colonel Claus von Stauffenberg, as a paragon of self-initiative and courage, and are set to hold a torchlit parade on Sunday in Berlin in his memory. The July 20 Plot on Hitler’s life is one of the most heroic but least known episodes of World War II. Severely wounded in combat, Colonel Claus von Stauffenberg returns from Africa to join the German Resistance and help create Operation Valkyrie, the complex plan that will allow a shadow government to replace Hitler’s once he is dead. But fate and circumstance conspire to thrust Stauffenberg from one of many in the plot to a double-edged central role. Not only must he lead the coup and seize contrl of his nation’s government… He must kill Hitler himself. Carl Woebcken, chief executive of Studio Babelsberg, which is co- producing the movie with Cruise’s company United Artists, said the delay was beneficial since the film could earn better box-office receipts next year. ‘Shooting has only just finished,’ he said. ‘We’re likely to have the first rough edit of the movie by the end of July.’ Location filming in Germany began in July last year, just as Germany was gearing up to mark the 63rd anniversary of the plot, and lasted till October. The director was Bryan Singer. Cruise, who plays Stauffenberg, is the main face in the trailer. Over the past few days Berlin and the surrounding region have been gearing up for the shooting of “Valkyrie,” which stars Cruise as the doomed hero. Old World War II-era planes with swastikas painted on the sides have already been practising scenes in the skies above Brandenburg, the state surrounding Berlin, and workers have been hammering away building a replica of the “Wolf’s Lair” — Hitler’s Eastern Front military headquarters — near the small village of Klein-Köris, 60 kilometers south of Berlin. Stauffenberg’s failed attempt to kill Hitler with a briefcase bomb on July 20, 1944 took place at the original Wolf’s Lair, which is located in present-day Poland. The fact that the audience will know from the beginning that the bomb plot failed has raised questions about whether the film can be truly exciting. The producers say it is more a thriller than a war movie. ‘The first half of the movie explains to you who these people were and what they would have to go through to successfully assassinate Adolf Hitler. ‘The second half of the movie we wanted to be the day of the event itself,’ explains writer Christopher McQuarrie in the video. The casting of Cruise, a practising Scientologist, in the role of the anti-Nazi hero caused controversy last year in Germany, where the Scientology creed is viewed by some people as anti-democratic. Stauffenberg and his fellow plotters are among the very few members of Germany’s wartime armed services given hero status today. [Via Deutsche Presse-Agentur]
Continue Reading
Advertisement
You may also like...
Related Topics:Bill Nighy, Bryan Singer, Kenneth Branagh, Tom Cruise, Tom Wilkinson, Valkyrie