A casino heist film The Thieves, basically South Korea’s version of Ocean’s Eleven, with edge-of-your-seat moments has become the highest-grossing South Korean film in history. With U.S. debut right around the corner we’re getting a look at the trailer and poster. The most successful South Korean filmmaker Choi Dong-hun’s (The Big Swindle) latest blockbuster, The Thieves features a ton of exotic locations, huge set pieces, and also a lot of  double-dealing. A gang of 10 thieves panning a heist to steal a precious necklace is played by the likes of Yun-seok Kim, Hye-soo Kim, Hye-su Kim, Gianna Jun, Jung-jae Lee, Simon Yam, Hae-sook Kim, Dal-soo Oh, Kwok Cheung Tsang and Soo Hyun Kim. A U.S. release is scheduled in limited theaters for this week, October 12th, 2012. Let’s see if The Thieves can break into America’s imagination as well as it done into Korea’s. [youtube]http://www.youtube.com/watch?v=xyIirn780zs[/youtube] Here’s a more detailed synopsis:

Popie (Jung-jae Lee), Yenicall (Gianna Jun), Chewingum (Hae-sook Kim) and Zampano (Soo Hyun Kim) are a team of professional thieves in South Korea. After they score a valuable antique vase, they hear from Macao Park (Yun-seok Kim) in which he proposes a highly lucrative new job in Macau. Meanwhile, Pepsee (Hye-soo Kim) is released from prison on a special pardon. A few years back Macao Park, Pepsee and Popie worked together as a crew. Macao Park and Pepsee were also in a romantic relationship. Then, while stealing gold bars, Macao Park’s cable snapped in a elevator shaft and he disappeared with the gold bars. Pepsee was arrested shortly afterwards. Now, Popie, Yenicall, Chewinggum and Zampano head off to Hong Kong to work with Macao Park. What Macao Park doesn’t know is that Pepsee is also coming with them. In Hong Kong, a separate crew awaits for the Korean thieves. The four Hong Kong thieves consists of Chen (Simon Yam), Andrew (Dal-soo Oh), Julie (Angelica Lee) and Johnny (Kwok Cheung Tsang). When the Hong Kong and Korean teams finally meet, tension rises immediately between the two groups. Macao Park then enters the meeting and lays out the plan. Their goal is to steal the “Tear of Sun” diamond. The diamond itself is currently in the possession of ruthless criminal Wei Yong. Furthermore, the diamond is stashed safely in the suite room of a Macau casino & resort. Macao Park also lays another bombshell. He can easily sell the “Tear of Sun” diamond for $20 million dollars. Now the two teams work together in what will surely turn out to be the heist of their lives, but the 10 thieves all have their own agendas. 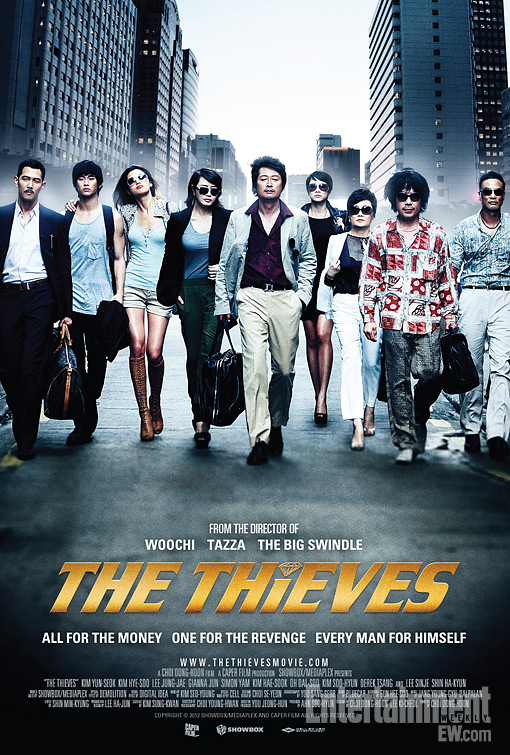 Continue Reading
Advertisement
You may also like...
Related Topics:Gianna Jun