The new Michael Bay’s Transformers film that will feature Mark Wahlberg in the lead role is currently filming in Texas and a few videos of the action have hit YouTube. Transformers 4 will follow a different story than the previous three films that starred Shia Labeouf and takes place exactly four years after the war in Chicago. Bay earlier said that the story, therefore, makes a very natural transition, and reason as to why they have a whole new cast. Meanwhile, the set for the upcoming flick catching fire in the town of Pflugerville, immediately north of Austin TX, while hey were filming a ‘controlled explosion’ at the time of the incident. Luckily, Wahlberg and Bay were evacuated from the set. The small towns of Lockhart, Taylor, Elgin and Pflugerville would be made into a fictional town and would be the likely venue for a police chase and a car explosion. Principal photography for the fourth installment of the blockbuster franchise (based on the Hasbro toy line) began on May 28th. T4 is set for release on June 27th, 2014. Here are set videos  featuring the Sonic RS rally car, which is reportedly an Autobot, along with some of the set photos (above and below). Starring in Transformers 4 is Jack Reynor in the starring role of a race car driver; the beautiful Nicola Peltz has been cast in the female lead role of Reynor’s girlfriend; Wahlberg has signed on to play Peltz’s father Flynn Vincent; Sophia Myles will play a major role as a scientist; Peter Cullen returns as the voice of Optimus Prime; Glenn Morshower reprises his role as General Morshower; Kelsey Grammer was recently cast as the lead villain named Harold Attinger. Directors Guild of America DGA Award winner Bay will return to direct his fourth installment of the film series from a screenplay penned by Ehren Kruger. 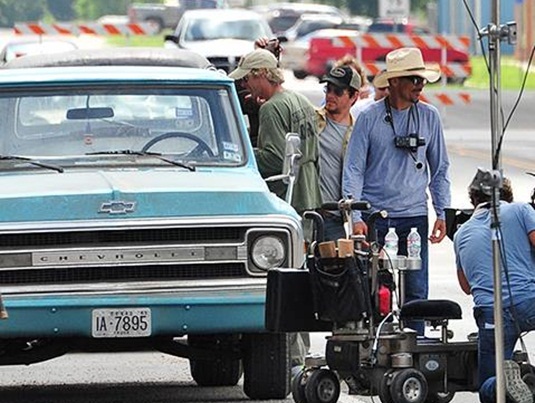